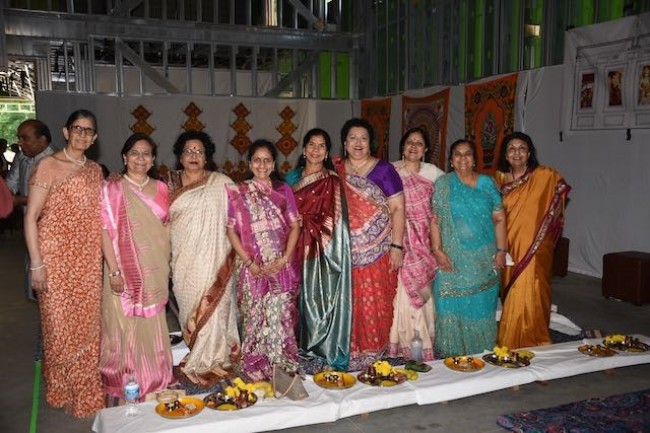 Atlanta, GA, June 9, 2016: Sanatan Mandir in Smyrna, GA organized a spiritually suffused Mandal Puja at the almost ready new Sanatan Mandir on the auspicious days of Vaishakh Shukla-Dwitiya and Tritiya (Saturday and Sunday, May 7 and 8). Mother’s Day was also celebrated on Sunday.

The construction of the new Sanatan Mandir is progressing well and hopefully will be inaugurated within a few months.

After Bhoomi Puja and Shilanyas, Mandal Puja is the third phase of the ceremonies. The final phase will be the pran pratishta ceremony. All who attended the Mandal Puja were full of admiration for the ten attractive marble murtis (deities) fromJaipur,India. The marble used for the Murtis is from the Makrana mines and of Chausariya grade –ideal for lasting long and retaining its luster. During the Pranpratishta ceremony each deity, Lakshminarayanji, Shri Ramji, Laxmanji, Sitaji, Hanumanji; Ganeshji, Hanumanji, (Das Swaroop) Shrinathji and Shri Venkateshvar Swamiji will be imparted pran (life force). The Mandal Puja initiates this process by placing the murtis in grains. Shivalinga and beautifully decorated Navgrahas were also on display along with the murtis. 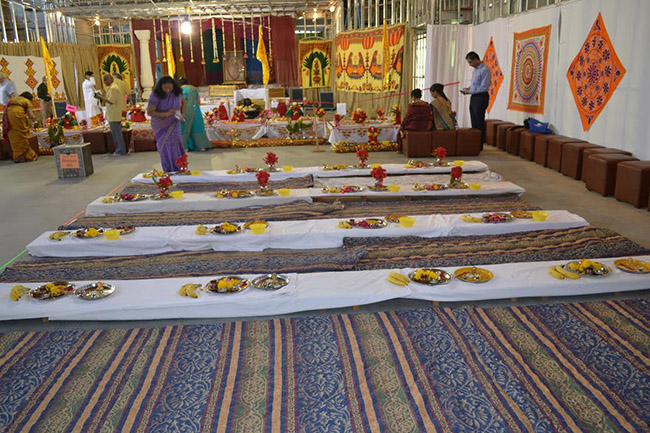 In between, Praful Desai informed the audience about the program and Mandal Puja Coordinator Prakash Desai noted the progress and status of the Mandir’s construction.  The Shikhar along with the Kalash is scheduled to arrive in next few weeks.  A model of the beautiful columns adorning the outside of the Mandir was on display. The columns are a replica of the columns in Jaipur. Dr. Prakash Desai announced that 15 sponsors have already agreed to pay $5000 each for the columns and 15 more columns are still available for sponsoring.  Sponsorships are also available for other murtis. Each murti can also have multiple sponsors. Each murti sponsor is eligible to become a trustee and participate in the Pran pratishtha.  Surinder Bahl and Kusum Bahl; Vir and Lucy Nanda and Dr. Kirit and Rashmi Shah have become the new Trustees. Bhaskar and Purvi Bhavsar have already sponsored Shiv Parivar murtis.

Dr. Prakash Desai also singled out Dr. Ashok Desai a renowned cardiologist for going extra mile in cleaning the trash from the parking lot and also Praful Desai for making two trips to India for selecting the sculptors to make the new murtis and approving the same. 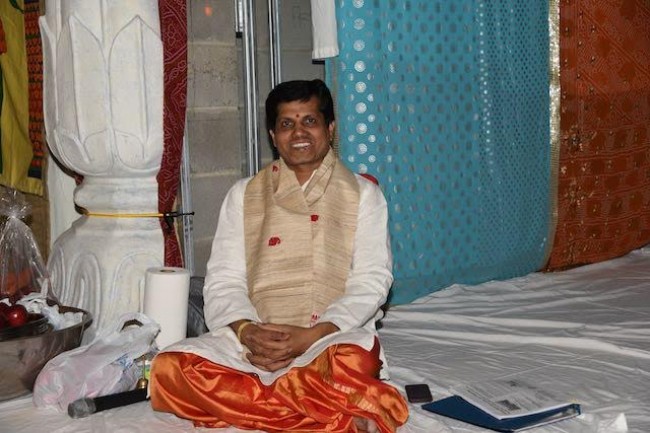 The attendees were invited to participate in Annadhivaas ceremony, when the devotees took grains and worshipped the deities by placing the grains at their feet. Later, Acharya Padhiji performed mantrapushpanjali. Kids of the Hindu Swayamsevak Sangh run Balagokulam in the Sanatan Mandir atSmyrna, performed a skit and dance program- the central message of which was to coexist and to respect nature and natural resources of the world for a greener earth. The younger kids aged 6 and under performed a foot tapping dance depicting Krishna and his cowherds having fun dancing together to the popular Hindi bhajan ‘Choti choti gaiya, chote chote gwaal’. Sreevidhya’s students sang Ganesha sharanam Bhajan,recited shlokas from Bhagavad Gita; and rendered a song on Lord Krisha in Tamil (Chinna chinna padam vaithu).Charvi and Sudikshana, who are students of K A Academy inMariettaperformed a scintillating Kauthvam in dance on Lord Muruga.

After the aarti, delicious Mahaprasad was served to all.

Acharya Padhiji said that Sunday was Akshaya Tritiya, an auspicious day when Brihaspati, (Guru), Sun and Moon come together. It was also Mother’s Day. Mothers are the epitome of compassion and knowledge and ought to be loved and respected by all. On Sunday, the Mandal Puja was graced by Consul D.V.Singh. The Vishesha Yajmaans and other devotees were led by Acharya Padhiji in archana. Later, Padhiji did Sarva Devata Mandir Puja, Goddess Laxmi archana and Chatur Veda Seva. Gayatri Mantras for each deities were also recited.

Hetal Gordon and Suja Katarya representing the younger generation gave inspiring speeches emphasizing the need for the new temple and the importance of giving back to the community.

Prakash Desai recognized Girish Modi for his photography and video services, and Anil Patel for capably handling the sound system.

After mantrapushpanjali and aarti, all were served delicious mahaprasad. Some items for the mahaprasad were generously donated by Haldiram and RajBhog while volunteers led by Kartik Patel prepared the delicious sabjis, daals, rice and puris in the currentTemple’s kitchen.

The Sanatan Mandir Trustees and Executive Committee members have strongly requested the community to support the Mandir through donations in cash or kind, or by volunteering. For more information, please visit the website; www.sanatanmandiratlanta.org