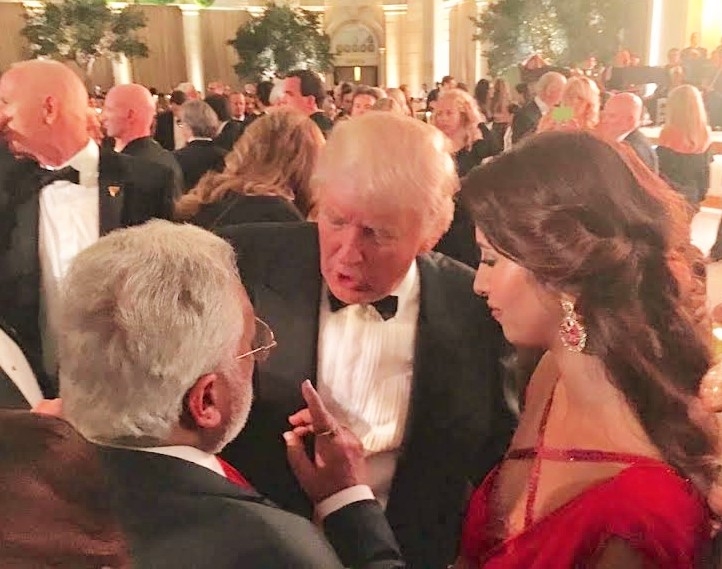 File Photo of Republican Hindu Coalition founder Shalabh Kumar, back to the camera, with Donald Trump.

Washington, Nov 5 (IANS) The Republican Party is using special software to identify Hindu voters with a view to tapping them for particularly close contests in the upcoming midterm elections.

Shalabh Kumar, the Hindu outreach for the Republican party and former President Donald Trump, said the proprietary software has been developed in-house by the Republican Hindu Coalition (RHC), which he founded and heads, and has a success rate of 95 per cent.

It’s a simple process of narrowing names by religion, country of origin and ethnicity and then using an algorithm for picking out the Hindu voters by their names and last names.

The focus is on Michigan, Wisconsin, Pennsylvania, Arizona and Ohio — all swing states that are won or lost by extremely thin margins, making every vote count.

“The funny thing is that almost 85 per cent of Hindu voters in the database provided by the Republican party are identified as independent or not-committed,” Kumar said.

Hindu Americans are an overarching classification that covers Indian Hindus and Hindus from Nepal, the Caribbeans, Fiji, Mauritius and other places.

Anecdotally, the US doesn’t have a population count by religion, not since 1950. There are an estimated 4.5 to 5 million Hindus in the US, according to one count that includes Sikhs and Buddhists, and American Hindus such a Tulsi Gabbard, the first Hindu elected to US Congress.

And they are now a political constituency, more pronounced this midterm elections than before. Trump said he loves Hindus in 2016 at a campaign event hosted by Kumar in New Jersey. It was a gesture held out to woo Indian-Americans at large, he had gone on to promise that on his watch as President, the US would be the best friend India had.

Kumar had founded the Republican Hindu Coalition just a year before in 2015 with a parade of senior party officials and lawmakers, making it the first significant attempt at projecting Hindus as a political force, modeled on the powerful Republican Jewish Coalition.

Shekhar Tiwari, a veteran of the RSS, started the American Hindu Coalition a year later with the express purpose, he said, of tapping Hindu voters in swing states. Though founded as Republican-leaning, it has evolved to cut across party lines and now boasts of both Republican and Democrat caucuses.

Many more politically oriented bodies, called Political Action Committees (PAC), have emerged since, with the sole aim of harnessing Hindus, their immense financial clout and votes. Americans 4 Hindus, American Hindu Coalition, Hindu American PAC National. They got together past September to announce themselves as a political force at an event on Capitol Hill, home to US congress, also addressed by many lawmakers.

“The Hindu American identity has been evolving and it received an unforeseen push this year because of disquiet among many of us with the Indian government’s stand on Ukraine, which left us feeling as outsiders among Americans, most of whom were appalled by the Russian invasion on Ukraine,” Tiwari said.

Hindu activism has been on the rise in the US, mostly as an extension of politics in India. A bulldozer, as a symbol of repression of Muslims in India, was unwisely used at an Indian Independence Day rally in New Jersey in August by the BJP’s US sympathizers and friends that so alarmed the state and the community outside that it continues to be condemned several months hence.

Slogans of “Jai Shri Ram” and “Bharat mata ki jai” were chanted at an event on US congress premises in September that was attended by front and affiliated organizations of the RSS, such as Sewa International and VHP America Even some moderate Hindu participants were uncomfortable with “such a naked display of Hindu identity”.

Overall, and not linked to the above aggression, Kumar noted with satisfaction that Hindu Americans are playing a larger role in US politics than ever before.