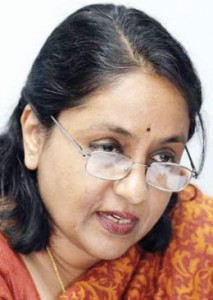 New Delhi, August 1 (IANS) India’s immediate priorities would be in its neighbourhood as that is where its immediate interests are, said Sujatha Singh who took over as the new foreign secretary on Thursday.

Singh, 59, took over from Ranjan Mathai. The 1976 batch Indian Foreign Service officer will have a fixed tenure of two years.

Talking about dialogue process with Islamabad, Singh said it was resumed in 2011 and since then two rounds have been held.

“There is a new government in Pakistan now. We will be picking up the threads from where we left off with the old government,” she said.

Singh said strengthening relations with strategic partners all over the world is also important.

About a latest video of Pakistan soldier admitting to killing Captain Saurabh Kalia in 1999, Singh said: “We strongly condemn any treatment of our soldiers that is not in line with the Geneva Conventions.”

“This is precisely why the issue has been repeatedly taken up starting with Jaswant Singh (former external affairs minister) with his then counterpart Sartaj Aziz.”

“It was also raised in Geneva and we have continuously been taking up this issue with the Pakistani government. If there are some new facts that have come to light, we will assess it and then we will decide how to proceed further in taking this up,” she added.