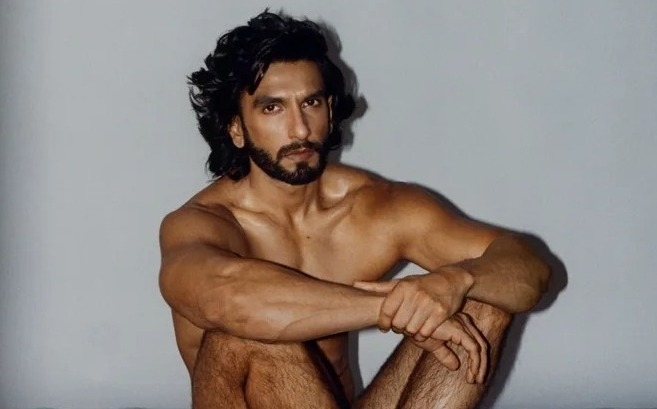 New Delhi, July 21 (IANS) Ranveer Singh may be having a dismal run at the box office, but he never fails to make news. From his adventures in the wild with Bear Grylis to his purchase of a Rs 119-crore mansion next to Shah Rukh Khan’s “Mannat”, Ranveer never misses his date with the headlines.

He makes news even when he accompanies wife Deepika Padukone to Cannes, or shows up with her at a Konkani conference in the United States. If he can’t do it alone, there’s always Deepika to lend him a helping hand. But now, he has done it alone — and without a stitch of clothing that defines his flamboyantly non-conformist fashion sense.

In the tradition of Milind Soman, who did it first with Madhu Sapre, and more recently by himself at a Mumbai beach, Ranveer is breaking the Internet by posing in the buff for Ashish Shah of ‘Paper’ magazine, flaunting his ripped body and toned muscles, looking straight out of an ancient Greek statue.

“My post-pandemic appetite for prolific work has become insatiable,” Ranveer says in an interview with ‘Paper’, an independent pop culture magazine published from New York and available on the Net on www.papermag.com. “I’m so hungry for work, to do, to give, to perform, to ideate, to create, to collaborate. I have a ravenous appetite for work, I’m doing 20 hours a day and I’m damn f***ing happy about it.”

“I feel like I’ve got FOMO about life,” he continues in the interview, where he talks at length about his dystopian view of time and life, and his fear of death. “Something might happen if or when I’m sleeping. It’s not sustainable, and I realise that.”

Well, by appearing naked in a magazine, he has definitely shown the distance he’s prepared to travel to be in the spotlight.

The actor will be next seen in Rohit Shetty’s next directorial “Cirkus” with Jacqueline Fernandes and Pooja Hegde. The film is slated to for a Christmas 2022 release.

Ranveer also has Karan Johar’s “Rocky Aur Rani Ki Prem Kahani” with Alia Bhatt, Dharmendra, Shabana Azmi and Jaya Bachchan. The film was to hit the big screen on February 11, 2023, but is now believed to be delayed because of Alia’s pregnancy.