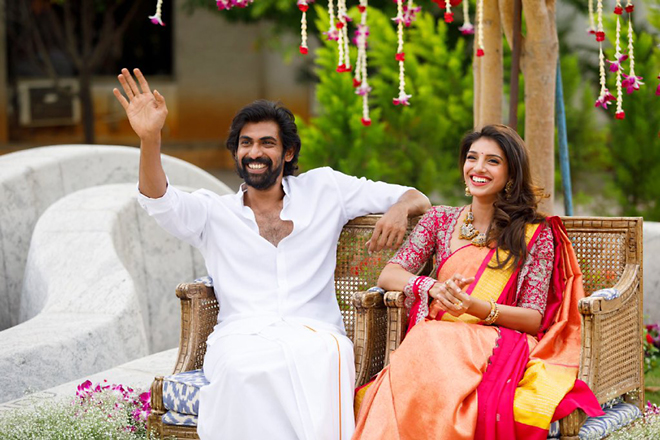 Hyderabad, May 21 (IANS) After recently confirming his relationship with Miheeka Bajaj, Telugu superstar Rana Daggubati has now made it official with a roka ceremony.

The actor took to social media on Thursday to share moments from the private function with his fans and followers.

‘”And it’s official,” the “Baahubali” star wrote on Instagram while sharing a happy picture of the couple.

For the daytime ceremony, the couple opted for a colorful, floral decor and fairy lights.

In the photographs, Rana is seen beaming with joy in a white shirt with a matching white dhoti. Miheeka looks stunning in an orange-gold sari with yellow and pink border, teamed with a heavily-embellished blouse and chunky ethnic jewelry. She left her hair open and wore subtle make-up.

Miheeka, who is founder of Mumbai-based Dew Drop Design Studio, also took to Instagram to share her “beginning of forever” moment. She also put a photograph on Instagram Story, writing: “Officially mine!”

While many speculated that the couple got engaged, Rana posted a screenshot of a chat on Instagram Story to share that it was a roka ceremony.

Earlier this month, Rana had made his relationship with Miheeka public. Sharing a photo with his Miheeka, the actor wrote on Instagram: “And she said yes! #MiheekaBajaj.” He used a red heart emoji along with his caption.