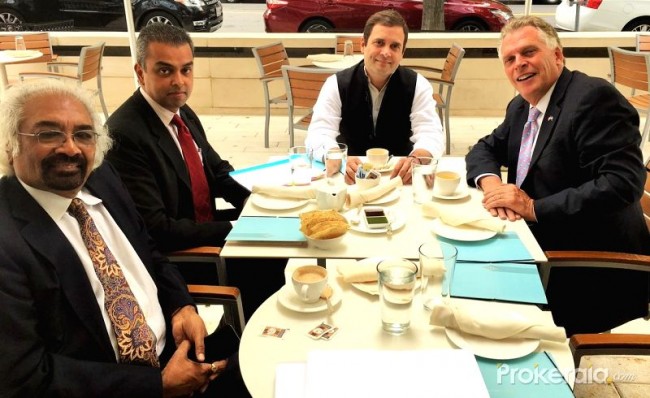 Two weeks of a well-orchestrated tour of the US may not be enough to determine whether Congress Vice President Rahul Gandhi is a reflective and seriously analytical politician, as his supporters insist, or a privileged nincompoop, as social media so churlishly characterises him.

However, what it appears to have done somewhat successfully is lend him some sheen for the urban constituencies that have been missing in his public engagements in India. At the very least, the tour helped him reboot — even though it remains to be seen if all apps fire up subsequently.

His visits to San Francisco, Los Angeles, Washington, D.C., Princeton and New York exposed him to a diversity of opinion makers but, put together, the audiences were no more than 5,000 people. While the numbers do not necessarily tell the whole story, what they do say was that the attendees were mainly props to transmit a more credible message back home, where his voice is either instantly derided by a frenzied social media trolling culture, or ignored altogether.

Unfortunately for Gandhi, the people with whom he interacted with sobriety and substance — to the pleasant surprise of many of them — are of no consequence to him in his larger political strategy back in India. Even his much-emphasised message to the 21st century non-resident Indians (NRIs) of India’s independence movement being propelled by the early 20th century NRIs such as Mohandas Gandhi, Jawaharlal Nehru, Babasaheb Ambedkar and Vallabhbhai Patel, had only limited resonance.

His first public speech, at the University of California-Berkeley, the famed home of unfettered US liberalism, did make some news in India because of Gandhi’s clarity of purpose on subjects such as the rate of growth versus very low job creation, and the country’s syncretic culture coming under a serious strain by divisive political forces. Ironically, what made most news was his rather glib dismissal of dynastic politics, saying that had become the way things are done in India even in professions beyond politics.

From all available accounts, his interactions with the mainstream political and policy communities in Washington left most of them rather impressed by his understated but substantive style. The image of Gandhi within these fraternities has been one of an absentee politician riding his family name. However, the Washington meetings seemed to have changed that uncharitable point of view.

Perhaps the most extensive policy-focused engagement that he had was in front of some 200 students at Princeton University where he displayed a grasp of broader economic, political, cultural and social trends. His central point was about the need to create large-scale jobs as a vehicle to impart a broader vision to India’s increasingly frustrated population. He kept citing the number of 30,000 Indians entering the job market every 24 hours and barely 450 of them managing to find employment.

The thrust of his argument was that unless this dire statistic was urgently addressed it would be impossible to think in terms of a vision for a great future. To his credit, he acknowledged his own party’s failure to meet that number even while saying that the current government too had failed. He did speak in terms of working unitedly to address the central question of jobs.

One recurring feature of his interactions was India’s reputation as a tolerant and harmonious culture having suffered a major setback in recent months. He said he was asked throughout his tour what had gone wrong with the country — and his response was to speak of “a divisive politics”.

The showcasing of the 47-year-old’s serious side outside the relentless ridicule he faces in India may help him personally in attending to the Congress Party’s decline with renewed vigour. However, the scale of the party’s disaffection is so great that its rejuvenation is unlikely to come via Berkeley or Princeton, but through his unfailing engagement across the length and breadth of India.

The role that the NRIs could play in boosting Gandhi’s prospects as a credible rival to Prime Minister Narendra Modi is rather limited, but to the extent their positive attention can lift his personal spirits in a way he can achieve that goal, the tour could be particularly useful.