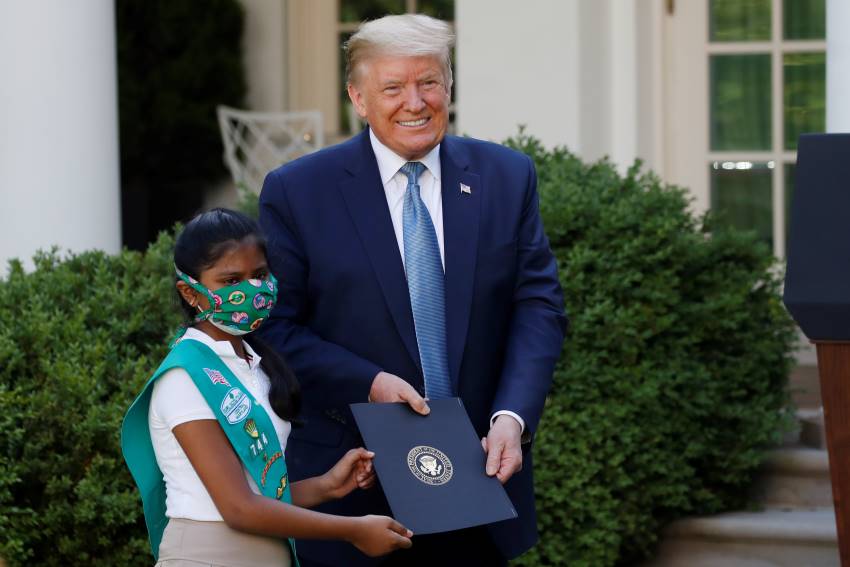 Washington, D.C., May 20, 2020: President Trump and first lady Melania paid tribute earlier this month to several American heroes who are helping on the frontlines of the coronavirus crisis. Among those who were honored were three ten-year-old Girl Scouts, Sravya Annappareddy, Laila Khan and Lauren Matney from Troop 744 based out of Elkridge, Maryland for donating 100 boxes of Girl Scouts cookies to local firefighters, doctors and nurses.

Laila Khan, representing the troop, thanked the President for the honor and said the three of them were representing their entire troop and millions of other kids. She said, in the middle of March when everything began to shut down, the Girl Scouts, like many other Americans, felt compelled to help healthcare workers who are fighting the pandemic, to show their appreciation.

“We donated a case of cookies to local firehouses and hospitals and created cards to mail to healthcare workers and community,” she said. One of the parents who is a healthcare worker took their cards and placed them in the lockers of doctors, nurses and other essential workers at Children’s National Hospital.

A nurse from Williamson, Virginia, who worked 12-Hour shifts for 42 days straight was honored first.

A New York City Police Sgt., Spencer Garrett who contracted the disease and spent a month recovering, was the second honoree.

In his opening remarks, President Trump said the US as a nation is united in fighting the coronavirus pandemic and millions of heroic Americans are rising to the occasion in helping everyone across. The President added that they had gathered at the Rose Gardens in the White House in awe and admiration for heroism, exceptional bravery, commitment and love of some of these Americans.

The nation is united in grief and prayer for the precious lives lost fighting this invisible enemy, he said. “The men and women we honor today remind us that the bonds that unite us in times of hardship can also raise us to new heights as we reopen and recover and rebuild.”

President Trump then invited each and every honoree with a letter of recognition.

Sravya said, she feels honored to represent all of her Girl Scouts and thinks she happened to be one of the lucky girls to be picked for the ceremony.

Sravya’s family has roots in Andhra Pradesh. Her father Vijay Reddy Annappareddy, a pharmacist from Maryland told NRI Pulse that Sravya has volunteered often in various community activities like many other children, but getting recognition from White House was totally unexpected. He said, both he and his wife Dr. Seeta Kallam, told their daughter to be humble about the opportunity and asked her to continue to do more.