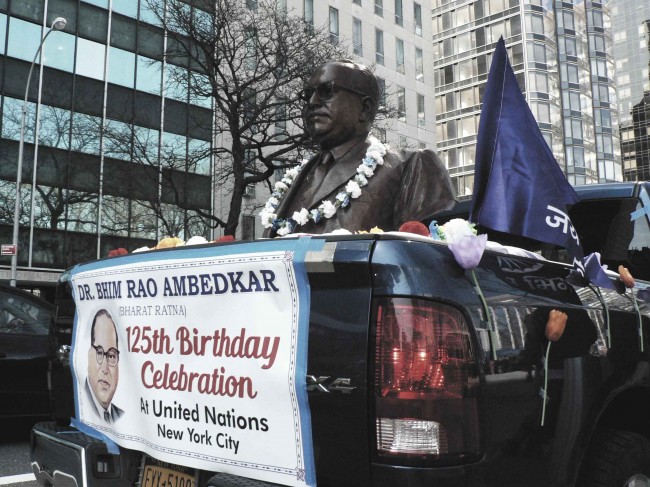 A float honouring B.R. Ambedkar was brought by the Begumpura Cultural Society of New York to the United Nations headquarters in New York on Wednesday April 13, 2016 during the celebrations of his 125th birth anniversary.

United Nations, April 14 (IANS) As the UN celebrated B.R. Ambedkar’s 125th birth anniversary by examining the relevance of his legacy to its global development goals, the world body heard a plea to declare April 14, the birthday of the crusader against discrimination, as “International Equality Day”.

“I believe Baba Saheb’s lifelong struggle for equality was not only for the people of India but for people around the globe,” Punjab Assembly Speaker Charnjit Singh Atwal said at the Ambedkar Jayanti celebration here on Wednesday. Therefore, as his “true tribute and honour”, he said that April 14 may be declared the “International Equality Day” by the UN.

“Ambedkar understood that inequalities pose fundamental challenges to well-being” and the UN had adopted the elimination of inequality as its goal, she said.

Clark is now the head of the UN Development Programme and a candidate for Secretary General of the UN in the upcoming elections.

The theme of the celebrations organised for the first time by the Indian Mission to the UN along with the Kalpana Saroj Foundation and the Foundation for Human Horizon was “Combating inequalities for the achievement of SDG” and included a panel discussion on the relevance of Ambedkar’s message to these goals.

These could be seen in the parallels between the SDG goals of eliminating inequality and the Constitution that Ambedkar developed for India, enshrining the principle of equaity, and the UN’s goal of achieving gender equality and his commitment to affirmatively empowering women, he said.

More than 550 people — diplomats, international officials, academics, civil society activists and Indian residents from across the US — filled a UN conference room for the celebrations.

A troupe of dancers and drummers performed at an entrance to the UN. The Begumpura Cultural Association of the New York brought a decorated float with a bust of Ambedkar to the UN.

Meanwhile, Pakistan’s UN mission organised a briefing on regional cooperation in Asia exactly at the same time as the Ambedkar celebrations a few rooms away at the UN.

The Ambedkar celebrations featured two remarkable Dalits, who acknowledged they owed their positions to Ambedkar.

Kalpana Saroj, whose foundation co-sponsored the celebration, is the chairperson of Kamani Tubes, an industrial manufacturer with an annual turnover of over Rs.100 crore.

She spoke of discrimination based on religion that “treats crores of its adherents worse than dogs” and said that fed up with such atrocities “Ambedkar accepted Buddhism and bestowed upon us the duty to follow the path of truth and non-violence of Bhagwan Buddha”.

Deelip Mhakse, the president of Foundation of Human Horizon, said India owed its emergence as a power on the world arena to Ambedkar’s vision of promoting “education and exertion”.

Stan Kachnowski, a visiting professor at the Indian Institute of Technology-Delhi and chair of HITLAB (Healthcare Innovation Technology Lab), said that if today India was “the intellectual capital” of medical technology and pharmaceuticals, it was a consequence of Ambedkar enshrining the primacy of education.

This had in turn led to Amebedkar’s imprint being placed on the world’s health development as it pursues goals like the elimination of tuberculosis and the provision of clean water technology and mosquito netting, which are among the UN’s goals.

Harvard University lecturer Christopher Queen saw parallels in the careers of Ambedkar fighting for the rights of the Dalits and Martin Luther King for African Americans and the role religion played in their lives and in their politics.

Dalits and blacks still suffer, he said, and the situation has taken a turn for the worse lately in both countries.

He referred to the continuing attacks on African Americans and the recent suicide of Rohith Vemula, a student at the University of Hyderabad who killed himself reportedly because of harassment based on caste.

An associate professor at Ambedkar’s alma mater, Columbia University, Anupama Rao, also spoke of the Vemula case and the protests but said that such violence could no longer take place in secrecy because of the Constitution that Ambedkar drafted.

She said that human rights can be realised only when there were political and economic equalities and Ambedkar advocated economic redistribution because of this.

The SDG goals can only be achieved through social justice and eliminating inequalities as Ambedkar advocated, she added.