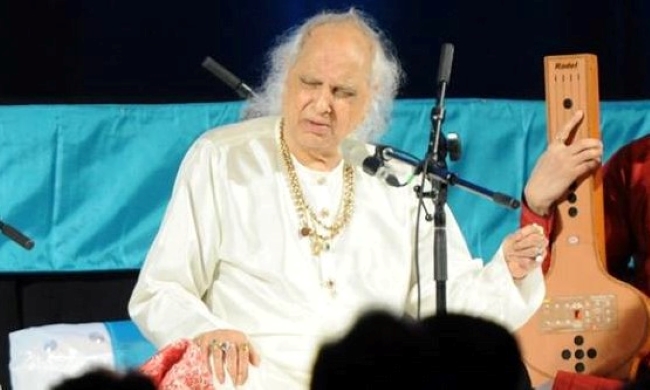 File photo: Pandit Jasraj at the Heartfulness concert in Atlanta.

New Delhi, Aug 18 (IANS) It was a long journey for the six-year-old who, on his way to school stopped the moment Begum Akhtar’s ghazal ‘Deewana banana hai to deewana bana de’ wafted from a small shop. They say everything changed for that little boy in that pause. The one who the world would later know as Pandit Jasraj — someone who let go of strict geometrical precision by bringing an element of devotional singing to Khayal.

Not shying away from incorporating elements from other gharanas, he summoned to spaces a peculiar spiritual content and consciousness — that otherworldly aspect every musician forever strives for. Remember ‘Shyam Bina’? The love, the longing, the searching, the wait, the feeling of disappearing into oneself, and that final ‘escape’… Krishna must have stood still somewhere today, if only to acknowledge the passing away of Pt. Jasraj who died of cardiac arrest at his home in the US on Monday.

He was 90, but would still stop to admire a musical note, to say gracious things that would make a musician’s day. And yes, he seldom missed a game of international cricket or hockey whenever India played.

During a long illustrious career spanning eight decades, the maestro, who was initiated into vocal training at the age of 14, later trained as a tabla accompanist under his elder brother Pandit Pratap Narayan. He trained as a classical vocalist with Pandit Maniram, and later with Jaiwant Singh Waghela, Gulam Qadir KhanAand Swami Vallabhas Damulji to give his first solo concert at the age of 22 in Nepal.

A specialist in Haveli Sangeet, who also created ‘Jasrangi Jugalbandi’, the maestro, who belonged to the Mewati gharana is remembered by contemporaries and juniors not just as an artiste who never shied away from reinventing himself, but also an individual who had reached a stage where it was tough to differentiate between the man from his art.

Sarod virtuoso, Ustad Amjad Ali Khan is convinced that Pt. Jasraj’s death marks the end of a golden era of music. “I shared so many festivals with Jasraj bhai right from the sixties. He effortlessly gave a unique dimension to vocal music and was someone who surpassed his own time. He was the last of the golden era of Indian classical vocalists which included Ustad Bade Ghulaam Ali Khan Saheb, Ustad Amir Khan Saheb Pt. Bhimsen Joshi and Pt. Kumar Gandharva. Mewati Gharana came to limelight thanks to his genius. It has been a great personal loss to me.”

Recalling that over the last decade, they must have performed during the same evening in about 50 concerts, sitar player, Ustad Shujaat Khan, who was recently part of HCL Digital Concerts, smiles, “I would always tell him it was awkward for me to play post his performance considering he was much senior, but he would always brush that off. His passing away is not just a personal but also a national loss. I have been remembering green room conversations, our travels and concerts ever since I heard the news. The man was in a place of his own. I can never forget an early morning concert by him in Delhi a few years back. You know, people ask if you have experienced God — that day the Bhairav Raga surely made me realize what music could do to a human being’s emotions.”

Remembering the time when Pt. Jasraj taught her classical renditions, singer Asha Bhosle says, “A childlike enthusiasm never left him. Being in his presence was always a blessing. The moments were so blissful. His demise is an irreparable loss to the world of music. I have lost my elder brother today.”

A few years back, tabla player Bickram Ghosh met him at an airport. As always, Pt. Jasraj was carrying his swarmandal. Ghosh offered to carry it for him. “But I am quite comfortable. After all, this is a part of my body,” the maestro said with a straight face.

“Pt. Jasraj represented the time when Indian classical music shone at its brightest. Post independence, there was a huge struggle to establish an identity — what was India? Culture always leads the map, and classical music was the shining star. Single-handedly, he took the vocal genre to unbelievable heights. His value system of sadhna is unparalleled. Also, remember that our music is not pedestrian, but lofty. That loftiness needs to be communicated through the personality too — and he lived up in that department too.”

Speaking to IANS from the US, Ustad Shahid Parvez Khan feels that just like the loss of Pt. Bhimsen Joshi, and now Pt. Jasraj’s demise is a huge loss not just for his audience, but the music fraternity too. “I have loads of memories associated with him. As a kid, he encouraged and pushed me no end. He was forever there to help and support. You become an ‘ustad’ or ‘pandit’ in the real sense when a senior addresses you like that — he was the first to give me that honor.”

Writer Madhur Kapila, who wrote a book on him recalls attending concerts and staying with him and his family for weeks. “An extremely warm person with not even a hint of arrogance, I still remember a trip to Benaras when he sang early morning at one of the ghats. The whole experience stunned me into silence. He was drowned in his own voice. Everything and everyone seemed to have paused in that moment. Perhaps that is what real art does to us, make us quiet deep inside.”