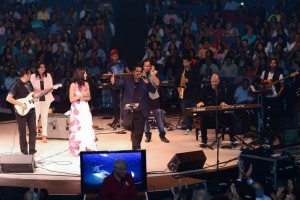 Shankar Mahadevan, Ehsaan Noorani with Loy Mendonsa performing before at the Revolving Theater in Westbury, NY

(Dallas, TX & Westbury, NY: June 18th, 2013): Continuing with their Nine City Musical Tour across the United States, organized by the American Association of Physicians of Indian Origin (AAPI), Shankar Ehsaan Loy, the musical trio from India, mesmerized over 7,500 music lovers with their amazing and magical performances with a string of melodious and masti-filled songs last weekend, Saturday, June 15th in Dallas, TX and on Sunday, June 16th in Westbury, NY.

Shankar Mahadevan, Ehsaan Noorani with Loy Mendonsa, who shot to fame with their with their albums, Dil Chahta Hai and most recently, Kal Ho Na Ho, which in addition to winning millions of hearts, won the trio several national awards and international recognition, are part of the much anticipated Multi-City Musical Program organized by AAPI. 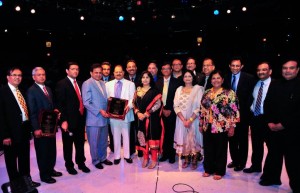 Dr. Jayesh Shah along with Long Island/Queens, NY Chapter members at the Theater in Westbury recognizing local sponsors and supporters of the event.

“These multi-city mini-seminars, musical tour along with the Obesity Awareness program are a novel way for education and recreation that will raise funds for the local chapters of AAPI, the national AAPI and the AAPI Charitable Foundation,” Dr. Jayesh Shah, President of AAPI, who had attended all the four eves so far, said. “Many of our industry partners liked this concept where they could get prime time with a few hundred doctors for product promotion/theater, CME lectures, exhibits, and booths.” The events are proving to be effective in fulfilling their objectives at every City.

“They promised a “Texas size” … and sure it was!,” Dr. Ravi Jahagirdar, President-Elect of AAPI said, after attending the event, “The Dallas TIPS/AAPI combination reached out high, and with their enthusiasm and extensive ground work by the volunteers, they presented a formidable show.” A record 5,500 packed audience at the Curtis Cullen Center located near Dallas, TX got mesmerized on Saturday night, thoroughly enjoying every minute of the over three-hours long musical concert.

Starting with the initial emphasis on Childhood Obesity and the CME lectures, on to an elegant dinner and recognition of a large number of sponsors, a huge Souvenir as a take home memo, and finally a rocking crowd in an arena, all fitted in well in the Texan evening. The S-E-L tri took due notice and responded with an energetic display of vocal power blending into the light and sound show accompanying. The night stayed young as the artists and guests simmered at the same wavelength, until the last song…and then the Texans all rode out into the night.

“The trio performed beyond our expectations and turned the “Nite” truly into a magical one,” Dr. Srini Potluri, convener of the organizing committee in Dallas, said. “The concert hall was packed to capacity, thanks to our volunteers and their diligent efforts to reach out to thousands of people during the course of the year.” Others who had worked hard to make the event successful included, Dr. Manju Sachdev, Dr. Sumit Kumar, Dr. Ashwani Agarwal, and Dr. Anup Shetty.

The musical nite at the famous Revolving Theater in Westbury, NY on Father’s Day was a treat to the hearts and souls of over 2,000 in audience who had come in from the New York tri-state region. Shankar and his troupe began the concert in New York with a traditional invocation to Lord Ganesha, seeking blessings, good health, wealth and wellbeing to the music lovers who had filled the round shaped concert hall.

The trio then paid tributes to the masters of the Bollywood music world, singling from each of their compositions to the delight of the audience even as the trio took them down the memory lane of the past 100 years of Hindi filmi music world. The little anecdotes and introduction to the songs and accompanying artists by Shankar with much spontaneity added spice to the music he and his team so eloquently performed. “You are truly a listening audience,” Shankar told them even as the crowds cheered him loudly. There were classical, semi-classical and fast moving numbers from the movies the trio had composed and many others from the eternal world of music composed by almost every popular Bollywood music director. The crowds danced and sang with every song he and his accompanying artists gave.

With rhythmic claps and audible hums, Shankar Mahadevan and his team engaged the audience in conversation, leading them to sing with him, which the crowd did regularly and enthusiastically. He would put the microphone out for the audience to sing along, which the crowd seemed to enjoy. “You all sing so beautifully,” he told the crowd even as they completed the lines of the songs where Shankar had left. The Bollywood singer ended the show with a “Breathless song” leaving the crowd breathless for more than two minutes of non-stop singing. Before anyone could realize it was more than three hours of non-stop music and masti and it was time to say good-bye to these most talented artists from the Bollywood world.

Earlier during the day, AAPI president Dr. Jayesh Shah, president of AAPI, spoke about AAPI’s ongoing programs and how AAPI’s musical events and the obesity campaign are helping in bringing all the local chapters and associations together, helping them to be more proactive. Later on, he along with the local Chapter organizers recognized several community leaders and sponsors with a plaque each. Dr. Krishan Kumar praised his team which had worked so hard to make the concert a success. “It is to the credit of our Long Island/Queens, NY Chapter of AAPI that we have been able to put together this event, against many odds, especially having it on a Sunday night and on Father’s Day.” The event in New York was coordinated, among others, by Dr. Krishan Kumar, Dr. Ajay Lodha, Dr. Sunil Mehra, Dr. Tarun Wasil, Dr. Shahi Shah, and Dr. Vajinath Chakote.

Showcasing one’s own expertise and experiences to the group, combining the Carnatic and Hindustani vocal tradition (Shankar), Western Rock (Ehsaan) and a deep understanding of fusion including a virtual mastery over the electronic synthesizer (Loy), the trio  showed how pooling of their individual strengths, often combining deep knowledge of Hindustani (North Indian) and Carnatic (South Indian) classical music with technical expertise as composers and orchestral arrangers, can entertain Bollywood audiences themselves with their chart-topping music.

AAPI is a forum to facilitate and enable Indian American Physicians to excel in patient care, teaching and research and to pursue their aspirations in professional and community affairs. For more details on the Nine City Tour and the Childhood Obesity Awareness Campaign,   please visit:  www.aapiregionalconference.org.