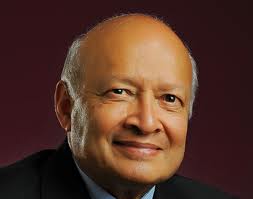 Kerala-born Stanford University Professor Kailath, 79, received the medal along with 18 of America’s top thinkers, discoverers, and innovators at a ceremony in the East Room of the White House Thursday.

Marvelling both at the amount of brainpower packed into the room and the magnitude of the laureates’ achievements, Obama said: “The results of the work of the people we honour today have transformed our world.”

“Kailath came to this country from India at the age of 22, with a research assistantship that took him to MIT, and then Stanford, where he made critical contributions in information theory and statistics, and mentored more than 100 scholars along the way,” he noted.

“I’m intrinsically hopeful,” he said amidst laughter and applause. “That’s who I am. That’s who we are as a people, as Americans, as a nation. We’ve had to fight to make stories like the ones here in this room not only possible, but sometimes likely.”

Kailath was honoured for “transformative contributions to the fields of information and system science, for distinctive and sustained mentoring of young scholars, and for translation of scientific ideas into entrepreneurial ventures that have had a significant impact on industry.”

Born in 1935 to a Malayalam-speaking Syrian Christian family, Kailath is also a recipient of the Padma Bhushan, one of India’s high civilian awards, and is a member of major science and engineering academies in India.

He received his BE (telecom) degree from the College of Engineering, Pune, before getting his SM and ScD degrees in electrical engineering from the Massachusetts Institute of Technology.

He then worked at the Jet Propulsion Labs in Pasadena, California, before joining Stanford University as associate professor of electrical engineering in 1963.

Kailath’s research and teaching at Stanford have ranged over several fields of engineering and mathematics, with a different focus roughly every decade, according to his profile on the university website.