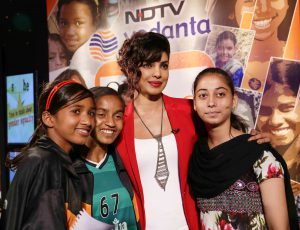 New Delhi, Aug 21 (IANS) From Bareilly to Boston to Bollywood – Priyanka Chopra’s success story is testimony to how, if small town girls from middle-class families are given the freedom to choose their life’s course, they can do wonders. A positive change in people’s attitude towards the girl child is something that the country truly deserves, she says.

She owes it all to her parents, who let her live the life she wanted.

“I am very fortunate… Not every girl child is as lucky as me,” Priyanka, who endorses the empowerment of the girl child in the country, told IANS here.

“I come from a very small town and from a middle-class family. I don’t come from an affluent background, I don’t come from somewhere where my life was about pubs and discotheques. Despite that, my parents gave me an opportunity to be whoever I wanted to be, they educated me, they gave me values and they gave me a great life by always going out of the way,” said the 31-year-old.

“They (several girls) don’t even have the ability to have a say or have a choice in their lives, or in what their future will be. And that is something that deserves a change in this country,” added the actress-singer, who is now the face of NDTV-Vedanta’s Our Girls Our Pride campaign.

Priyanka, who was born in Jamshedpur, has voiced concerns for child rights and, also specifically, for the girl child, for as long as one can remember.

Recalling how her parents sensitised her to the issue since her childhood itself, she said: “My mother is a gynaecologist, my father was a surgeon… so as a kid, I remember how every few weeks we used to take the ambulance and go to the villages with doctors and a few nurses when we used to stay in Bareilly (in Uttar Pradesh, where she spent some parts of her formative years).

“I was eight or nine years old then. My mom did IVF and fertility for women, and I always saw her providing women who couldn’t have kids with children – whether boys or girls.

“Children were an important part of my upbringing. So when I became Miss World, I got really involved with the Miss World Foundation and I started associating with a lot of NGOs and people who would help with the cause,” she added.

Has she witnessed a change?

“I have,” said the Unicef Goodwill Ambassador, with utmost promptness.

After pausing a moment, she said: “We are a huge nation of many types of people. To bring about a change in a nation, which has so many different kinds of thoughts, religions, and cultures… it will be hard. As Indians, we need to accept that.

“But as human beings, we also need to accept that we are in a world where the child sex ratio in India stands at 840 girls per 1,000 boys (as per 2011 census). It’s ridiculous. I think it will take time for the kind of change we’re looking for. Of course, it will take time, but I’m not delusional and say we are going to eradicate all ill practices. That’s not going to happen.”

“But, yes, I see momentum and that is positive,” added Priyanka, making her statements even more powerful with her striking red power suit.

The lady in red said she wanted to “perk up” her look with the attire after a hectic flight from Los Angeles following a month’s stay in the US. She was there busy promoting her international projects – the animated movie “Planes”, in which she has given voiceover to an Asian character, and her second English single, “Exotic”.

Careerwise she is on a roll – awaiting the release of big ticket films like “Zanjeer” and “Krrish 3”. “Planes” is set for an Aug 23 release in India.

With some pats and some brickbats for her new projects, the multi-faceted National Award-winning star just believes people should “stop judging” others – be it for their work or philanthropy.

“People just need to see others for what they are. They need to stop thinking that there’s an agenda behind everything,” she said.