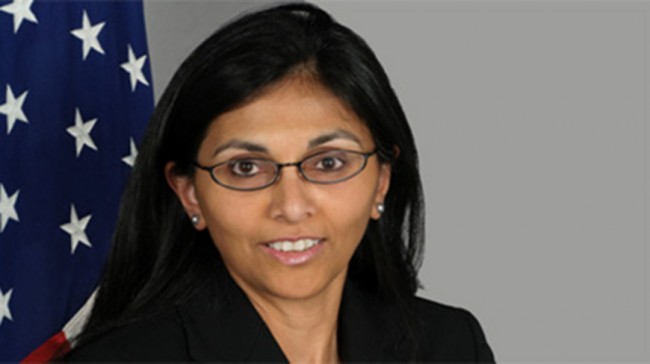 Washington, Oct 11 (IANS) Nisha Biswal, a former US Assistant Secretary of State for South and Central Asian Affairs, will head the US India Business Council (USIBC), according to an official announcement.

“We are thrilled to welcome Nisha Biswal to the US-India Business Council and to the US Chamber team,” said Myron Brilliant, US Chamber executive vice-president and head of International Affairs.

“She is a driven, visionary leader who has a strong record of advancing United States business across the growth markets of Asia and throughout India.

Under her strong leadership, we’re confident the US-India Business Council will play a critical role growing commercial partnership, investment, and innovation across the world’s oldest and largest democracies,” Brilliant said in a press release on Tuesday.

The 42-year-old former diplomat will start her tenure from October 23 next.

Biswal succeeds another Indian American, Mukesh Aghi, who left the organization following disagreements with the US Chamber of Commerce. The USIBC, an advocacy group that promotes business and commercial ties between the US and India, has presence in both the countries.

Since Aghi’s exit, Khush Choksy was serving as the organisation’s Acting President.

“I am honoured and excited by the opportunity to lead the US-India Business Council and to join the leadership of the US Chamber of Commerce during a period of historic opportunity for both countries,” she said in the USIBC release.

“As one of the most significant and fastest growing markets, India is an important economic partner for the US. Likewise, Indian companies are investing in ever greater numbers here in the US. I am proud to be part of an organization which will play such a critical role shaping US-India relations, and I am thrilled at the chance to help our companies deliver a brighter, more prosperous future for the citizens of the US and India.”

Biswal’s entry is expected to boost the powerful business group that has more than 300 members.

“UPS applauds Nisha being named as the new president of the US-India Business Council,” said Jim Barber, President of UPS International, a member of the USIBC.

“At this critical time, she will bring dynamic leadership and well-established economic expertise to the mission of improving the US-India relationship.”

During her tenure at the State Department, Biswal was responsible for US relations with Bangladesh, Bhutan, India, Kazakhstan, Kyrgyzstan, Maldives, Nepal, Sri Lanka, Tajikistan, Turkmenistan, and Uzbekistan.

Additionally, Biswal has held positions in other government and non-governmental organisations. From September 2010 through 2013, Biswal worked as Assistant Administrator for Asia at US Agency for International Development and oversaw more than $1 billion US assistance to 22 countries.

She also served as the majority clerk for the House Appropriations Committee Foreign Operations Subcommittee.

In her roles in the non-government sector, Biswal worked as Director of Public Policy at InterAction, and as an international delegate for the American Red Cross in Armenia, Azerbaijan, and Georgia.

Biswal was awarded the prestigious Samman Award by the President of India in January 2017.