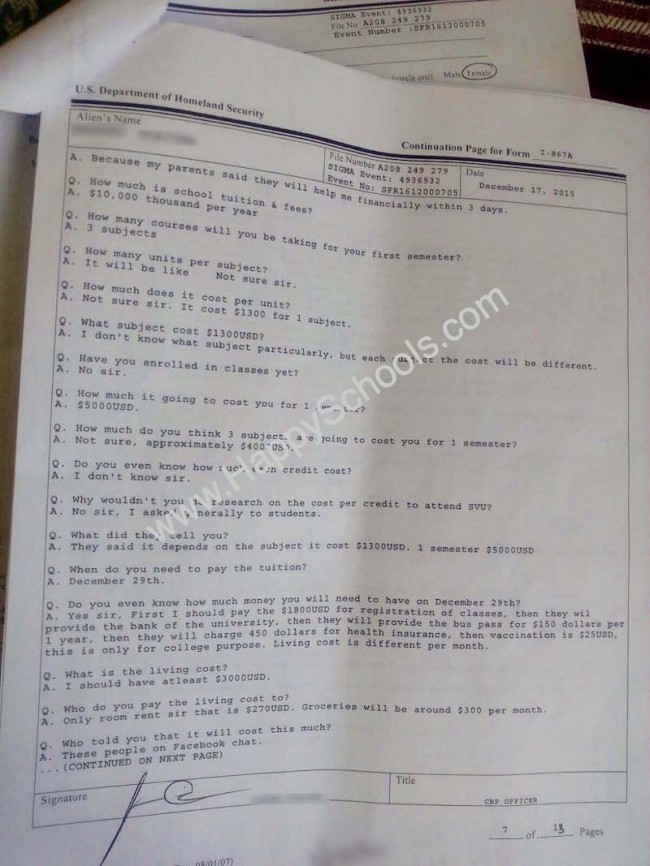 New Delhi, Dec 30 (IANS) The government on Wednesday issued a new advisory to all Indians traveling to the US following the deportation of a number of Indian students for providing information “inconsistent with their visa status”.

“The US government has conveyed that the decision to deny entry to these (Indian) students is not because of the corresponding institutions being ‘black-listed’ but based on the assessment made by the US immigration authorities of individual applicants,” the external affairs ministry said in a statement.

“According to the US government, the deported persons had presented information to the border patrol agent which was inconsistent with their visa status,” it added.

Earlier this month, 14 Indian students who had gone to join the Silicon Valley University at San Jose and Northwestern Polytechnic University at Fremont — both in California — were deported by the US authorities.

In a statement, national carrier Air India said it received a communication on December 19 from the Customs and Border Protection that the two universities were under scrutiny and the students who arrived in San Francisco were not allowed to enter the US and were deported back to India.

The Indian government said it has taken up this matter with the US government. The US authorities have been asked to explain the reasons for the denial of entry on a large-scale to Indian students holding valid visas, the government said.

However, according to Wednesday’s external affairs ministry statement, “there have been further cases of denial of entry to Indian students holding valid visas to pursue studies in other US educational institutions”.

“Some Indian nationals travelling on business/tourism/work visas have also been deported,” it stated.

According to the statement, India has remained closely engaged with the US government on the issue and has strongly emphasised the need for the US authorities to honour the visas issued by their own embassies and consulates.

“Apart from travel documents, the students should also carry all required documentation regarding their study plans, housing, financial support, healthcare arrangements etc. and be prepared for admission (entry to the US) interviews with US immigration officials.

“Similarly, all Indian nationals traveling to the US on other visas are also advised to carry the necessary supporting documentations regarding place of stay, financial support, medical arrangements, sponsorship details etc.,” it added.

On Tuesday, IANS reported from Washington that the Telugu Association of North America (TANA) has advised students from India to come well prepared in view of the heightened scrutiny at US airports.

TANA officials have been working with the Indian and US authorities to resolve this crisis, TANA president V. Chowdary Jampala said in a statement.

“We do not feel that there is any reason to worry for genuine students that are intent on pursuing their studies, respectful of US immigration laws and regulations,” he said.

All students coming to the US on new F-1 visas are being screened thoroughly at the airports, TANA said. Most of these students are being allowed entry after they satisfy the immigration authorities of their credentials.

However, a few students have been denied entry at various airports for varied reasons, including failure to speak confidently about what they plan to study, where they plan to live and how they plan to meet their tuition and living expenses, it said.

Some of those denied visa were not able to demonstrate having adequate financial resources and told the immigration authorities that they planned to get part-time jobs which is not allowed by the law, TANA said.

Some students had with them documents like applications for social security numbers, leading to questions about their intentions.

In some cases, some of the documents furnished by the applicants could not be verified and were suspected to be fraudulent.

Jampala urged the students and their families to note that student visas are given to pursue studies, they are not for working in the US.

There are limited circumstances in which an F-1 visa holder may work with the educational institution’s approval and supervision, TANA noted. Any illegal activity may cause detention, revocation of visa and deportation.