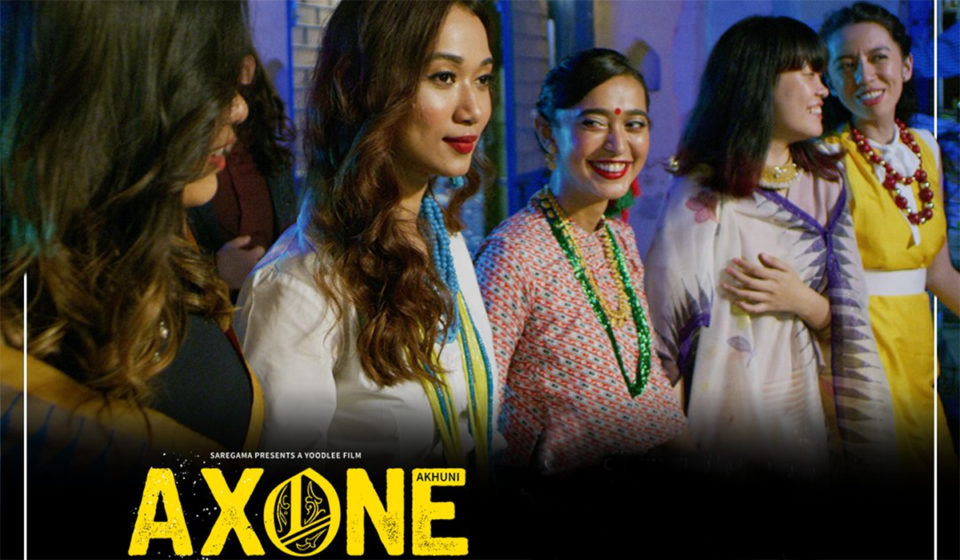 Nicholas Kharkongor’s film talks of racial discrimination that people of the Northeast face in mainland India, but never loses its sense of humor as it gets going. The film makes its point with understated firmness, without getting too in-your-face about it. It deals with the stereotypes, labels, bias and prejudices that northeasterners routinely fend against, setting up its premise around a single incident.

“Axone” (pronounced aakhuni) refers to a special dish from the region, which becomes the moot point that drives the plot, as well as a symbol of the film’s comment. The story takes off in the South Delhi locality of Humayunpur, where a group of friends are planning a surprise wedding gift for Minam (Asenla Jamir). Leading the charge are Minam’s roommates Upasna (Sayani Gupta), Chanbi (Lin Laishram), along with Zorem (Tenzin Dalha), and the surprise they have planned is the special Naga dish axone — fermented soya bean paste served with pork and dried fish.

Axone, which broadly translates to ‘strong smell’, is typified by its odor, especially while being prepared. It takes a sort of acquired taste to savour, which is not really the hallmark of their North Indian landlady (Dolly Ahluwalia), who take umbrage at the permeating smell as they start preparing the dish.

That is where the group’s adventures start, adamant as they are to cook a special wedding gift for their friend.

In a volatile city as Delhi, racial tension has led to brutal fallout over reasons far less innocuous than an objectionable smell. However, director Kharkongor’s purpose was obviously never to delve into the darker recesses of racism. He prefers looking at the malady with nonchalance.

The plight of the friends is therefore seen through the lens of humour, which ranges from subtle wit to hilarity. There is an element of irony that Kharkongor’s storytelling quietly imparts, in all that the group has to go through to simply prepare a dish that many of their neighbours have a problem with just because it smells foul to them.

Kharkongor packs in the standard ideas that one would associate with segregation of northeasterners. Vulgar comments are passed at the girls. The standard jibe of “tum sab ki shaklein ek jaisi hoti hai (you all look alike)” invariably finds its way into their story, as well as the expected joke about slit eyes.

You would expect the film to move solely on these lines. Where Kharkongor makes a fascinating departure is keeping his protagonists from the Northeast real. There are no black and white characters here, and neither is the film trying to evoke sympathy for the group. Rather, if the idea was to simply hold a mirror at society and spark off a thought process among the audience, the filmmaker makes it work both ways. His film captures flaws in his protagonists from the Northeast, too.

It is interesting, after all, to note Upasna’s inadvertently comic struggle with the name of an African neighbor. Interestingly, Upasana herself faces as a hint of racism within the group because she is a Nepali and not from the Northeast. Bendang (Lanuakum Ao), one of the boys of the group, calls their ‘desi’ friend Shiv (Rohan Joshi) a “f****ng Indian” during an argument. Yet, Bendang proves his inherent love for things that are Indian, too, when he strums the guitar and croons “Uthe sabke kadam”, laboring to get the pronunciations right.

Perhaps to sustain an overall bonhomie, Kharkongor packs his screenplay with a few extra characters of characters and sub plots that have no relevance. Zorem’s past and present love tracks with Minam and Upasna only add to melodrama. Similarly the Chanbi-Bendang subtext seems merely there to highlight a streak of racism northeasterners are prone to face in the streets. Although dramatically executed, the track fails to add to the overall plot.

An overall impressive cast makes the film enjoyable. Rohan Joshi as the hilarious Shiv is worth a special mention and Adil Hussain’s cameo, with absolutely no dialogues, adds to the humor.

Kharkongor has opted for a happy ending — this is a feel-good comedy, after all. Still, the film does a diligent service drawing attention to the northeastern community that resides amongst us, and gently reminds us that they, too, are as important while defining the pluralistic culture fabric that completes India.