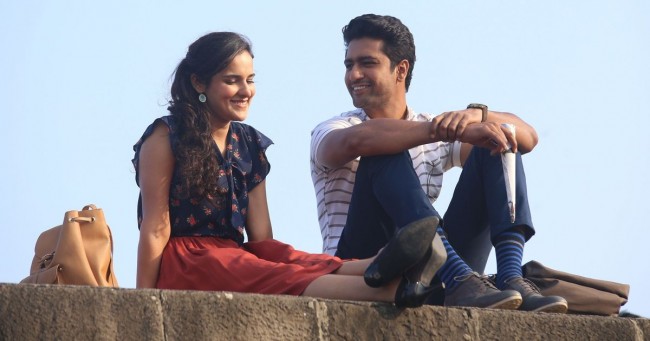 Not too many people write love letters these days. So let’s celebrate this love letter from actor-turned-director Anand Tiwari to director Basu Chatterjee. Tiwari’s “Love Per Square Foot”, released on Netflix and to be released in theatres in April, falls in the space of those bitter-sweet dramas about the housing space that we saw in the 1970s.

With a lot of sex, rather, sexy suggestions of sex, thrown in. In one sequence when Vicky Kaushal’s Sanjay Chaturvedi is close-dancing Angira Dhar’s Karina she refers to the stir in his pelvic region. As he mumbles his explanation his phone in his pocket rings. She meant that only.

What else could it be.

Quirkily captivating “Love Per Square Foot” has an endearing cast of charming actors who plunge into the plot in pursuit of a space where one can pitch the tent of one’s post-tenancy dreams.

There is an edge of desperation in Sanjay Chaturvedi and Karina d’Souza’s decision to form a marital alliance in order to procure a joint housing loan.

Vicky Kaushal, who is rapidly occupying the space for the working class hero where Ayushmann Khurrana already has a hold, is every inch Sanjay Chaturvedi who wants nothing more than a home of his own away from his well-meaning but annoying parents.

Newcomer Angira Dhar has a Zarina Wahab/Vidya Sinha kind of casual grace to her personality.

The couple’s journey from self-interest to love is well-charted, though portions of the narrative are enveloped in an uneasy uncertainty. But then there is Sanjay Chaturvedi’s predatory female boss, played with lip-smacking, nail-clawing, lip gloss-melting relish by Alankrita Sahai.

In the way she attacks her employee’s pelvic premises in her office, this woman is clearly a Harvey Weinstein in the making. Truly entertaining if somewhat alarming in her naked self-absorption.

But the film and its enchanting narrative propensity clearly favour the older actors. Raghubir Yadav as Vicky Kaushal’s bathroom-singer of a father is delightful, as is Supriya Pathak as his doting devoted wife. And Ratna Pathak Shah as the leading lady’s harried Catholic mother with her anxieties and biases brings the house down.

The film’s most likable sequence has Ratna visiting Raghubir and Supriya to fix her daughter’s wedding. To entertain his future relative, Raghubir bursts into ‘Yeh nayan darey darey’ on the harmonium.

Ratna is enchanted. “I’ve heard your voice before…were you on radio?” This is where we get to know that Raghubir was an announcer on a railway station.

In “Love Per Square Foot”, dreams come a long way from their origin in the City Of Dreams as we get to know characters whom we’ve met, or have seen on the road in passing, or probably heard talking across a thin wall in a cheap hotel room.

Admirably no one in this film about defeated dreams wastes time feeling sorry for him or herself.

These are people on the go…never mind where they’re going. At one point in the story, Karina drops in unannounced at Sanjay’s house.

“Could we sneak into your room?” she whispers at his door.

“I don’t have a room,” he smiles with a gleam in his eyes that could be tears. But it is not. Who has the time to cry when the real-estate agent waits with the key to your kingdom?