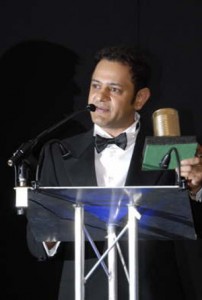 Rohit Gupta, maker of internationally acclaimed movies, Another Day Another Life and Life! Camera Action…, both of which garnered global recognition sweeping top awards stands testament to the saying “Purpose is the reason you journey. Passion is the fire that lights your way.” The fire sure spread far and wide with both these films having jointly won over 120 international accolades including multiple highest honors and top awards at numerous film festivals around the globe, also marking him as the first Indian filmmaker to have shot a feature film with a two-member crew with world-wide acclaim. The process of his work has become a landmark work in modern independent film.

Being born into and bred by a business family did not stop Rohit, an MBA graduate, from pursuing his passion for making movies. He believed in and strived to follow his dream of being filmmaker. His passion paid off with his first movie, Another Day Another Life, a 4 mins suspense thriller, made in $100, that became the official selection at the Cannes Film Festival, 2009.  It continued to be showcased for 3 years thereafter, winning over 50 international awards at the international festival circuit. A review from the Judges of the MIX International Shorts Film Festival 2012 said, Another Day Another Life is a remarkably fast pace film, the action never slows or halts. The title is an excellent one that implies so many different things. The film has received various awards and nominations, with the nominations categories ranging from recognition of the film itself (Best Short Film) for its direction, dramatic impact, music and writing.

He followed by Life! Camera Action... a 90 minutes family drama feature film in English, Hindi & Punjabi, that also turned heads and walked away with over seventy international awards in a short span of 18 months. The film was distributed in the US and India. Silicon India listed it as “One of the 10 Outstanding Movies by Indian American Filmmakers”. The list included M. Night Shyamalan’s Sixth Sense, Unbreakable; Mira Nair’s The Namesame, Mississippi Masala and Deepa Mehta’s Water & Fire. Here is an 1-2-1 excerpt with the filmmaker.

You are not from the movie background. What prompted you to take a course in filmmaking?
I am a fan of movies. I wanted to be a part of it’s creative process. To explore if I have what it takes, I enrolled for a 4-week filmmaking course.

What is the most exciting thing about movie making?
It’s evolving and organic process. Taking words to screen is exhilarating. It’s Magic and will always remain so.

Both protagonists in your movie are sort of in tryst with their destinies, bogged down with conflicts and eventually find their way. It appears to me that human nature and the struggle to find yourself, is the topic that appeals most to you. Is that a true statement?
It holds true for these two films. Not in general though. In the end it’s the script that drives everything. As destiny plays out, funny enough, both these films had similar themes.

In general, what kind of stories draws your attention?
It varies. In general I enjoy funny movies that can find some levity in them too, like Harold & Kumar part 1, Wedding Crashers, School of Rock, Clerks (I), Adnaaz Apna Apna, On the other hand, family subjects for eg: We Bought A Zoo, Real Steel, Yash Raj, Karan Johar films & zillion other.

You have made both your movies on shoestring budgets, and emerged successful both times. What is the secret to your success?
Just lucky!

Another Day Another Life was a short film, really short at 4 mins. It must be really difficult to convey a story from start to finish in that amount of time. What is the key challenge in making such short films?
I didn’t set you to make a 4 minute or any time length film. It just all worked out that way magically. To me a movie is a movie. The process of making a short or a feature is the same. Although, a short movie has no marketability. Therefore spending little extra time to make a feature proves worthwhile in the long run.

In the end, one needs to be happy about what they do, be it short, feature, or any other thing.

Tell us about Life! Camera Action
LCA is a family drama film. It is a story of Reina, who sets off to pursue a career in filmmaking without the consent of her parents. She is threatened to be disowned if she insists on her choice instead of doing what usually is the norm — become a doctor, engineer or an architect. At the center of this family drama, Reina is faced with a hard decision: She must give up her dreams in order to keep her parents happy or go against their wishes and follow her own path.

It started as a fifteen minutes short film assignment at the film school that was later converted to a full -ength feature film. It was shot in ten days and roughly edited on my Mac Book Pro. There was no bound script for the film. The co-writer of the film, had originally submitted a fifteen-page script loosely based on her own life. The project was tentatively titled “The Last Shot”. Upon editing this material, I felt the film had feature potential so I expanded upon the content, calling the extended version Life! Camera Action…, with The Last Shot becoming a part of it.

Who/What inspires you most?
In general, my existence and our system inspire me.

Bollywood is celebrating 100 years of its inception. Looking back, movies seem to depict the mindset of that decade/generation – some of course way ahead of their times. What do you think is Bollywood’s biggest contribution to our generation?
I have no clue!

What do you attribute your success so far, to?
United States of America. On the other hand, to me, everything is destiny. It’s like the screenplay of our lives has already been written, we just don’t know the next scene.

Many awards and accolades came your way early on in your film career. Would you be disappointed if the trend did not continue?
When I started off, without any guidance or someone to take a rain check, these awards came in handy as the only form of encouragement and reassurance but in the bigger picture, it is only one of the elements in product’s packaging and it’s success. I have experienced various brilliant products, amazing movies alike without any accolades attached to them. My aim remains to create a universal product and if everyone associated with it are able to take one step forward towards their desired goals is my ultimate success and award.  In general, my main goal remains to make a movie, sell it and go home. Besides I only believe in win-win situation, so being ahead of anyone doesn’t feel exciting therefore awards did not provide any personal gratification.

What movie/s are you currently working on?
Currently in post-production of an American feature film. You will know when it’s out.

What is your message to aspiring moviemakers?
Just do it. Film world is no different than any other businesses. Coming from no film background, when I can do all this, I would be very interested to know why anyone else can’t. Just execute what you feel like without any external influences. Unless you do this, you won’t know why and what you like about what you do. Speaking with other filmmakers from all over the world, the anxiety is the same. “What is the audience going to like?” Don’t worry too much about the audience’s reception of the product–to the point that it affects the process of creating the product. The audience, won’t know what they like “until they see it.” Some worry too much about audience expectations that there is a chokehold on creativity and productivity. Only when you feel something strongly, will your audience connect. This is the definition of success.

Asking for advice from those who never made a feature film is a great way of finding reasons for not doing it. Collaborate with, and ask for advice and suggestions from, those who have objectively achieved a level of success that you can relate to. There is nothing like being original. If you try to make everybody happy, you will lose yourself. In the end, if you are happy, then everybody around feels the energy and, in turn, feels happy, too. It’s just like doing everything else. There is no mantra to it.

Many aspiring filmmakers say their biggest hurdle is the lack of resources. I believe with technology at our fingerprints, everyone is able to do what they want. NO EXCUSES!