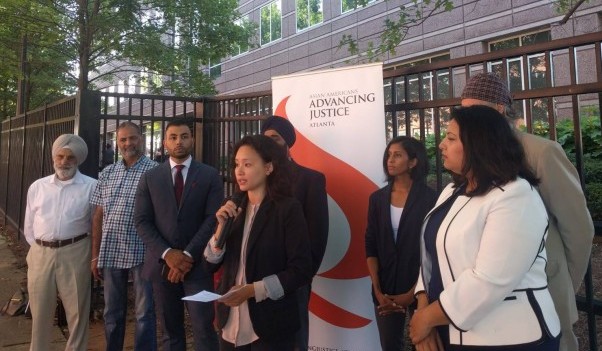 Atlanta, GA, June 28, 2018: On Tuesday, June 26, 2018, Asian Americans Advancing Justice-Atlanta (Advancing Justice – Atlanta), the South Asian Bar Association of Georgia (SABA-GA), and members of the Sikh community held a press conference to call attention to the ongoing hunger strike by migrants from India and other South Asian countries fleeing persecution at the Folkston ICE Processing Center and other detention centers throughout Georgia. The groups and community members are demanding that ICE officials and detention officers stop the illegal acts of retaliation against these migrants, and are urging the release of these individuals to their families and sponsors.

A coalition of immigrant rights organizations and community members release the following statement:

“South Asian asylum seekers escaped political and religious persecution and arrived in the U.S. seeking protection. ICE officials and this administration have used prolonged detention as a tactic to deter people from pursuing their asylum claims. These asylum seekers are on a hunger strike to protest their indefinite detention. We demand that ICE officials and detention officers stop any illegal acts of of retaliation against the hunger strikers and release these individuals,” said Van Huynh, Supervising Immigration Attorney at Advancing Justice-Atlanta.

“We will continue to fight against injustices happening in detention centers and stand up for the rights of asylum seekers. We filed a letter with the ICE Director of the Atlanta Field Office, Sean Gallagher, in support of the South Asian Asylum seekers and we demand their release as they are not a danger to the community, they are not a flight risk, and they deserve to be reunited with their families.”

Many of the hunger strikers are Indian Sikhs, fleeing persecution and seeking asylum. “We are a nation of immigrants, and this type of treatment impacts our entire community. The Sikh community of Georgia is deeply concerned and urges a closer examination of the current situation to make sure that each and every detainee is receiving fair and equal treatment under the law,”said Inderpreet Singh, a Sikh community leader.

“What we’re seeing is appalling with respect to the US’s obligation under the UNHCR to take in refugees,” said Waqar Khwaja, a member of the South Asian Bar Association of Georgia. “ICE has denied bond and deprived individuals with the right to seek attorneys to help out with their cases. Such due process violations impede the ability of detained families to effectively apply for asylum while detained, creating situations contrary to the public interest in which bona fide refugees are returned to face continued persecution, including death, in their countries of origin.”