Atlanta, GA: On Sunday August 24th, AIM for SEVA presented a 2-hour operatic ballet based on Kalidasa’s epic poem “Meghdoot” in BharatNatyam classical dances and was overwhelmingly received by the audience. Supple dance structure, great music and luminous lighting enhanced the dramatic aspects of Kalidasa’s epic poem. The performance was held atFerstCenterat the Georgia Tech and served as a fund-raiser for AIM for SEVA, which helps bring value-based education and health care to the least privileged sections of the Indian society.

This Cleveland Cultural Alliance’s production is scripted and choreographed by Shijith Nambiar and his wife Parvathy Menon. Its effervescent music is awesomely composed by Bombay Jayashri Ramnath. Premiered inIndiain July 2014, it is on a five-week tour of fourteen American cities through September,Atlantabeing their second stop. 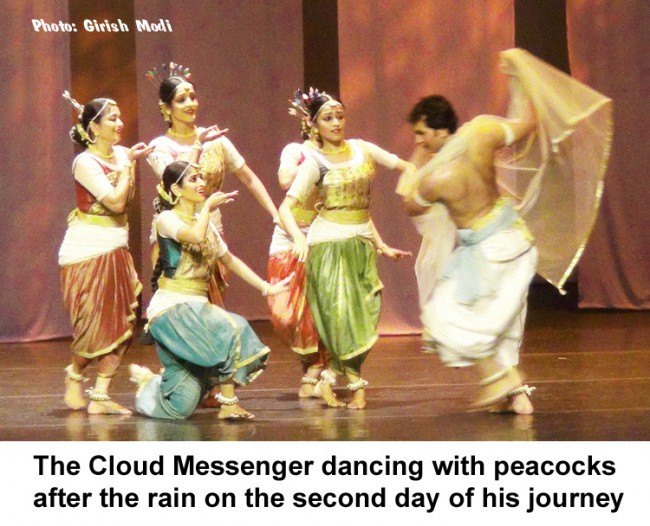 Meghdoot poem is not just about a man and a woman in love or about the pangs of separation, longing and despair. Nature is a compelling lead player in this epic story. Through the cloud messenger’s exquisite nuances of character the poem examines, in lyrical ways, the oneness of man and nature. Together they conjured up the Yaksha’s message of love into a bubbly dance production. The creative choreography, upbeat music that used both Carnatic and contemporary instruments and occasional Sanskrit voice accompanying English commentary enhanced the production.

For centuries Indian people have nourished and relished the mesmerizing world of Indian drama and theatre. Some of the famous drama and theatre organizations inIndiaare The Sangeet Natak Academy and The National School of Drama. Meghdoot Ballets performed by Priyadarishini Govind in Bharatnatyam and Debamitra Sengupta in Odissi are memorable ones. More than sixty years ago famous singer Jagmohan “Sursagar” had sung an immortal six-minute song that begins with “o varsha ke pahele badal mera sandesha le jana” which was composed by then famous music director  Khemchand Prakash.

In Meghdoot, Kalidasa recounts how a lovelorn Yakṣa, a subject of King Kubera (the god of wealth), after being exiled for a year to Mount Ramagiri for neglecting his duties, pines for his wife and sends a message to his wife at city of Alaka on Mount Kailāsa in the Himālayas. Lacking smartphone, internet, landline, or even a pony express, the Yaksha turns on his imagination and calls upon a wandering cloud to carry his message of love. And, we find, as he recites his missive, that his love is not confined to his wife. He loves the land, as well. The Yakṣa accomplishes this by describing the many beautiful sights the cloud will see on its northward course to the city of Alakā, where his wife awaits his return. 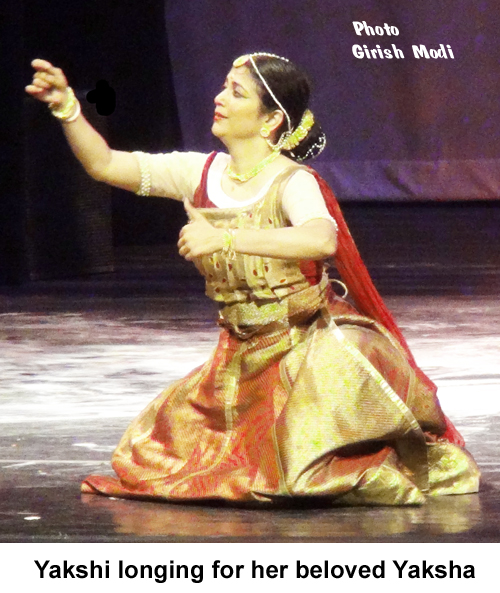 Established in 1991, Cleveland Cultural Alliance (CCA) brought this timeless story to the stage, as an operatic ballet that visualizes the beauty of Kalidasa’s poem and celebrates the richness of the Sanskrit language. Meghadootam is a culmination of many ambitions.

In the opening scene we see the grieving Yaksha and falling of the gold bracelet from his arm suggesting the sorrow of separation from his beloved. Then the cloud enters, saddened, drops a tear that falls on the Yaksha. He looks up at the cloud and sees an illusion of the Yakshi in the cloud. He is drawn to the cloud and wishes to take its form so that he can reach his beloved. The Yaksha’s mind becomes one with the cloud and the journey to Alka begins. It takes 4 days and 4 nights of this wonderful journey and is presented into eight mesmerizing scenes. 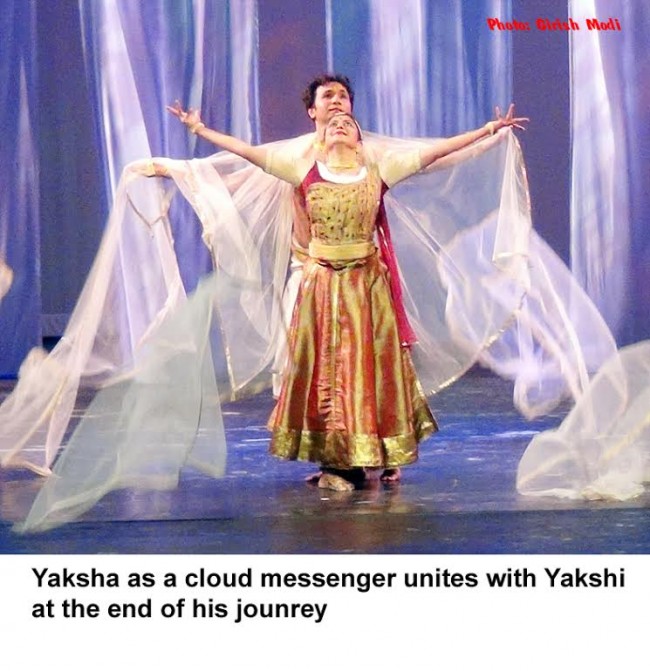 On first night, the cloud rests on the peak of the mountain and sees illusion of Yakshi in the moon. He tries to touch the moon and to follow it but in vain. On Day-2, the cloud stops to quench its thirst at river Sindhu. The river receives the rain poured down by the cloud and witnesses swans dancing in the rain, flowers bloom and birds singing. The cloud spends the night above a tree. On Day-3, the cloud passes through city ofUjjainwhere he sees pooja celebration in worship of Lord Shiva and joins the celebration dancing along. On Night-3 the cloud accompanies lonely women going back to their homes after the pooja. On Day-4 the cloud sees Sun’s rays dry away dew drops on the lotus and the lotus blooms in happiness. The cloud forms rainbow and invites the peacocks and deer of the forest below to dance in the rain. Seeing the peacocks and deer, the Yaksha recollects the beauty of the Yakshi and renews longing for her. At night in his dream appears the lovely Yakshi who herself carries him to Alka. They reachMountKailasaand from there she points towards Alka and says, “There in that beautiful city ofAlkawhich is illuminated by the crescent moon on Shiva’s head, you will find my emaciated form longing for you my beloved. Come to me quickly.” In Alka, the Yaksha imagines that he unites with his beloved Yakshi. The powerful climax in which the Yaksha unites exquisitely with his beloved… only to find it is but a dream and the Yakshi magically disappears from the Yaksha’s arms into the shadows! 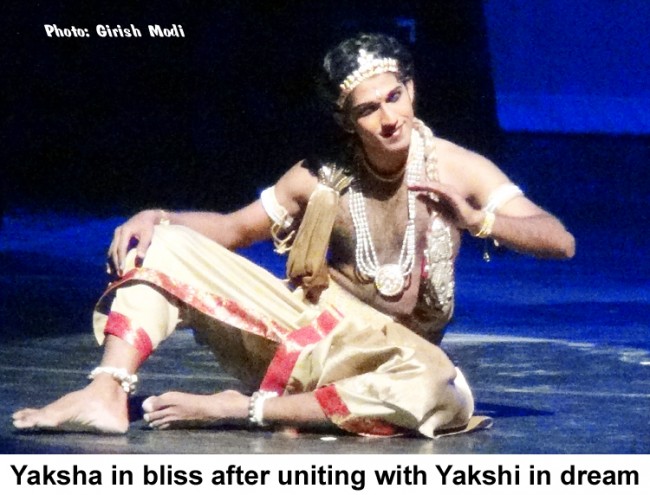 Throughout the ballet the music displayed clarity of thought that ensured a cogent narration. The sections featured different ragas placed around one main raga such as Mohanam and Desh, along with sollukattus (verses) in different nadais and an essay of instrumental music. The melodious vocal music sung by Bombay Jayashri Ramnath in the lead, supported by Satyaprakash and a host of others, carried the mood forward.

The English narrative by Baradwaj Rangan and the voiceovers not only aided appreciation of the Sanskrit verses but also enhanced the dramatic sense. While the period flavor was ushered in through elegant costumes designed by Lakshmi Srinath, the contemporary treatment came through in the supple dance structure, luminous lighting and background. 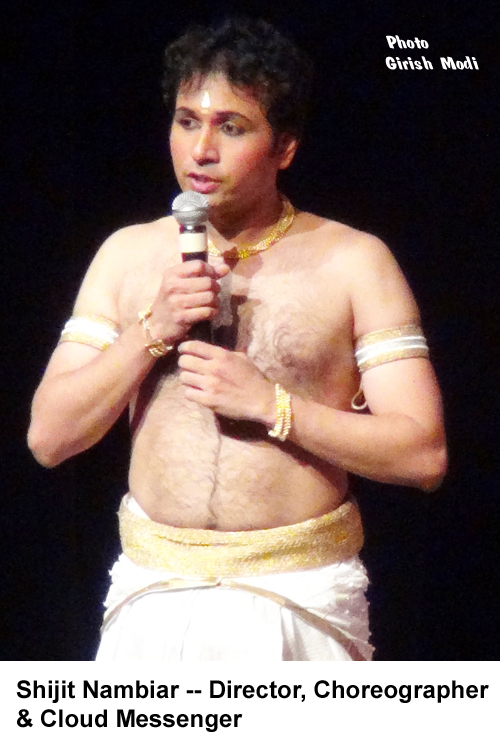 It was a spectacular show. The dancing, the dancers, the choreography, the music and sound arrangement, the costumes and the lighting came together seamlessly in a spellbinding performance. The brilliant lighting that made one forget there was no set at all. Glowing scenes of descriptions of Nature such as the dialogue of the bees, squirrel and creeper, the peacock dance or the flow of the river, added to the feel good factor. And the music – so appropriate, so melodious, so grand…and the sound effects – percussion, rhythm, recitation, chanting, birds, thunder, water, rain, torrential rain!  In the end, as we left the hall in enthralled silence, we almost expected a downpour outside the Auditorium. As a final note, the ballet was so well received by dance aficionados that AIM for SEVA raised $10,000 more than their goal amount.