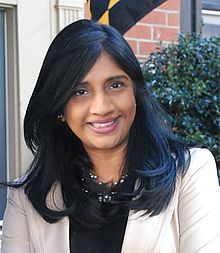 A native of Punjab and graduate of Amritsar Medical College, Kumar has served as a surgeon in Springfield for 37 years.

He was practically assured of the House seat after the withdrawal of his Democratic opponent several weeks ago.

In Connecticut, Republican Prasad Srinivasan, a physician was re-elected as State Representative unopposed.

A graduate of Baroda Medical College, he came to the US in 1975 and did his paediatric residency at Brookdale Hospital in Brooklyn, New York, and fellowship in allergy and immunology at Michael Reese Hospital in Chicago.

Democrat Latha Mangipudi, 43, was also re-elected to the New Hampshire State House from Ward 8 constituency, which has only 165 Indian-American voters.

Mangipudi who has a Masters in speech and hearing from the All India Institute of Speech and Hearing works as a speech-language pathologist.

She came to the US in 1986, and has lived in New Hampshire since 1989 with her husband Krishna Mangipudi, a computer professional and two children.

So did Aruna Miller, the first Indian American woman elected to the state’s House of Delegates.

Barve and Miller, both Democrats representing Montgomery County, were victorious in Maryland’s District 17 and District 15 respectively.

In Michigan, Democrat Sam Singh was re-elected to 69th House District. And in Washington State, Democrat Pramila Jayapal was elected to the State Senate seat.

Democrat Iraq war veteran Manan Trivedi, trying his his luck for the third time was trounced by Republican Ryan Costello, in Pennsylvania’s open seat in District 6.

In 2010 and 2012, Trivedi unsuccessfully ran against Republican incumbent Jim Gerlach, who has retired.