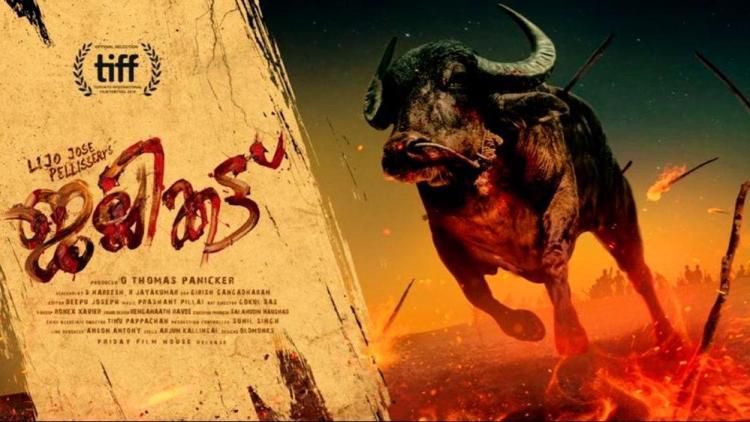 Mumbai, Nov 25 (IANS) The Malayalam film, Jallikattu, has been selected as the official Indian entry in the Best International Feature Film category at the upcoming 93rd Academy Awards, 2021.

The film has been chosen from among 27 entries across Hindi, Odiya, Marathi and other languages. Some of the other entries were “The Disciple”, “Shakuntala Devi”, “Shikara”, “Gunjan Saxena”, “Chhapaak”, “Gulabo Sitabo”, “Bhonsle”, “Chhalaang”, “Eeb Allay Ooo!”, “Atkan Chatkan”, “Serious Men”, “The Sky Is Pink” and “Bittersweet”.

The 2019 action drama is directed by Lijo Jose Pellissery with a screenplay by S. Hareesh and R. Jayakumar. It is based on the short story named Maoist by Hareesh. The film stars Antony Varghese, Chemban Vinod Jose, Sabumon Abdusamad and Santhy Balachandran.

The story revolves around a buffalo that flees from a slaughterhouse in a remote hill town of Kerala, and how the entire townsfolk end up in its hunt. As the hapless animal runs riot in the town, the plot brings alive the vicious side of humanity.

Actress Tillotama Shome sent in a shout out for the film.

“Congratulations to #lijojosepelliserry and the entire team of #Jallikattu for being India’s entry for the Foreign language film category. #Oscars,” she tweeted.

Last year, Zoya Akhtar’s “Gully Boy”, starring Ranveer Singh and Alia Bhatt, was India’s official entry to the Oscars, but the film failed to make the final list of nominees for the prestigious award.

The last Indian film to be nominated in the category was Aamir Khan’s 2001 release, “Lagaan”.

The 2021 Oscars are scheduled to take place on April 25. The shortlist for next year’s Academy Awards will be unveiled on February 9, and nominations will be announced on March 15.