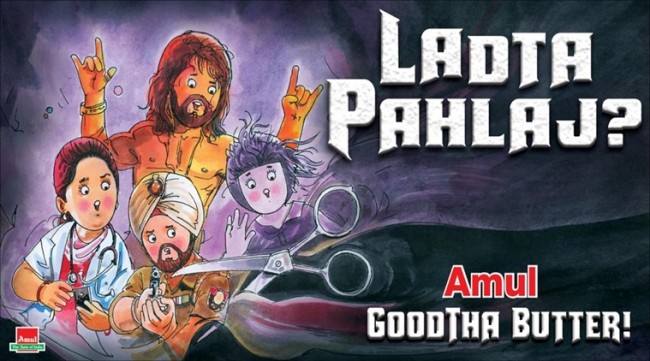 Mumbai, June 9 (IANS) Indian dairy brand Amul Co-operative Ltd, which releases topical ads to take a jibe at situations, has now taken a dig at the ongoing tiff between censor board chief Pahlaj Nihalani and makers of “Udta Punjab”.

The dairy company came out with a special advertisement surrounding the controversy of the film “Udta Punjab”, a movie which delves into the drug menace of Punjab and for which the censor board has ordered 89 cuts.

The advertisement shows a cartoon based on rockstar Tommy Singh (Shahid Kapoor), a doctor (Kareena Kapoor Khan), a policeman (Diljit Dosanjh) and the Amul girl.

They all look puzzled at a pair of scissors, symbolising the multiple cuts that the Central Board of Film Certification (CBFC) has demanded from the Abhishek Chaubey directorial.

The caption given to the ad reads: “Ladta Pahlaj”

Co-produced by Phantom Films and Balaji Motion Pictures, “Udta Punjab” is scheduled to be released on June 17.

Kangana slams Ranbir for not taking stand on politics