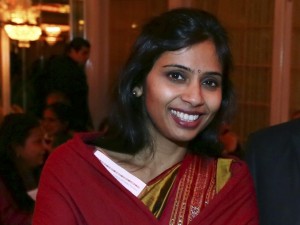 New Delhi/Washington, Jan 10 (IANS) Indian diplomat Devayani Khobragade who was formally indicted by a US grand jury and asked to leave the US, is on her way back home.

According to a tweet by India’s external affairs ministry spokesperson Syed Akbaruddin: ” Devyani Khobragade given G1 visa with full diplomatic immunity on 8 Jan2014. Airborne on way back to India.”

Khobragade’s handcuffing and strip search for alleged visa fraud had sparked protests in India. When she was arrested in New York Dec 12, she was India’s deputy consul general in New York. She was later transferred to India’s permanent mission at the UN to accord her full diplomatic immunity.

On Thursday, the 39-year-old diplomat was formally indicted by a US grand jury.

However, prosecutors said that Khobragade had also been granted immunity and that US officials had asked her to leave the country.

In a statement, the external affairs ministry said that “Khobragade, Counsellor at the Permanent Mission of India to the United Nations in New York, was accorded on Jan 8, 2014 the privileges and immunities of a diplomatic envoy under the terms of Section 15 of the Headquarters Agreement between the United Nations and the United States. At the same time, the U.S. Government requested the Government of India to waive the immunity of Counsellor Khobragade.

“On Jan 9, 2014, the Government of India declined to do so and transferred Counsellor Khobragade to the Ministry of External Affairs in New Delhi.

“At the time of her departure for India, Counsellor Khobragade reiterated her innocence on charges filed against her. She affirmed her gratitude to the Government of India, in particular to the External Affairs Minister, and the people of India, as also the media, for their strong and sustained support during this period.

“She also affirmed her determination to ensure that the episode would not leave a lasting impact on her family, in particular, her children, who are still in the United States,” the statement said.