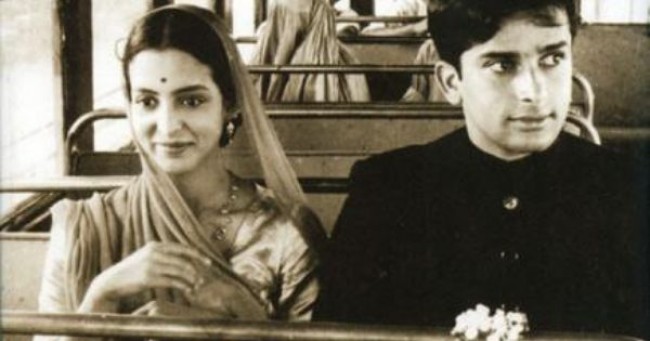 His elder brothers left one defining cinematic image – Raj the simple, honest ‘tramp’ in the Charlie Chaplin tradition, Shammi the jiving, rebellious ‘playboy’ but Shashi Kapoor surpassed them in sheer variety. Debuting as a Hindu fanatic, he was most famous as a lover-boy with a toothy grin and languid drawl but also as a reasonable foil to a smoldering angry man where he once spoke the four most famous words in Bollywood’s history.

Balbir Raj ‘Shashi’ Kapoor not only straddled commercial and ‘art’ cinema, but also became India’s first international star. Here he was not only cast in predictable roles – a decadent nawab, a prince-turned-ascetic, a devious local notable – but also in more nuanced ones – a lower middle-class teacher, a flamboyant film star, a narrator to Mohammad Ali Jinnah’s life and a poet in the twilight of life and reputation.

But he had even more contributions to the film industry. 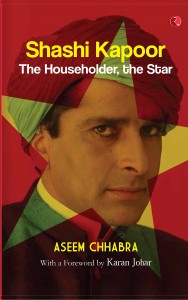 In time when Bollywood is a no longer only an Indian phenomenon, but engaging with Hollywood on its own terms and becoming a vibrant part of global cinema, his is a story that needs to be told. And his first biography comes from a film journalist and commentator whose first spat with his wife – the day after they got hitched – was quelled by a sight of Shashi Kapoor in a New Delhi hotel in 1985.

Author Aseem Chhabra, who is also a film festival programmer in New York, reveals an earlier bond with the actor. During a holiday in Srinagar in 1964, when he was not even 10, his shikara on the majestic Dal Lake was turned away, since a film shoot (Shashi-Nanda’s “Jab Jab Phool Khile”) was in progress and confesses to being “overwhelmed by crushing disappointment” to have not seen the stars.

Chhabra’s desire to tell Shashi’s story was further rekindled by the fact that people had forgotten him – his teenaged nephews and nieces only learning about him and placing him by virtue of his relationship to Rishi and Ranbir Kapoor. But fortunately, as he notes, soon after he started working on this in early 2015, Shashi was conferred the Dadasaheb Phalke Award which “reinstated him in public memory”.

But who is the real Shashi Kapoor, asks Chhabra. There is a wide gamut to choose from: a member of an already famous film clan, “India’s first international star – long before the Priyanka Chopras and Irrfan Khans..”, “by all counts, the most handsome Hindi film actor of that period”, “the producer, who backed some of the best independent movies in India in the 1970s and 1980s”, “the theatre enthusiast”, “the family man.. who did all he could to support his household, even if it meant acting in a few rather terrible (but well-paying) movies” and not only a “star” but an “eminently likeable star”. And in this work, he seeks to introduce readers to all these.

Though by no means a comprehensive biography, but through some telling insights and anecdotes from family members (children Sanjna and Kunal, nephew Rishi and his wife Neetu), co-stars like Sharmila Tagore, Shabana Azmi, and Simi Garewal, colleagues like Shyam Benegal, James Ivory, Hanif Kureishi, Aparna Sen and others and through some of his landmark films, it gives an unrivalled picture of the man and the actor. Sadly, Shashi himself could not be interviewed due to his bad health.

You will know why he was called Shashi, his difficult romance with Jennifer Kendall, how Satyajit Ray helped him, how his long association with (Ismail) Merchant-Ivory began, which iconic Hindi movie he was offered – and then refused, who else was considered for his role in “Deewar” – where the four words alluded to above – made him legend, and the experience of producing classics like “Junoon”, “36 Chowringhee Lane”, and “Kalyug”.

Then there is also why director Shakti Samanta sent him away from the sets of “Kashmir Ki Kali”, how he once emulated Shammi on the Venice waterways and why Saif Ali Khan (then aged two) bit an actor.

For those who already know about Shashi, this will be an illuminating read. For those who don’t, it will be necessary.

Don't read scriptures as fact, but as myth: Dan Brown