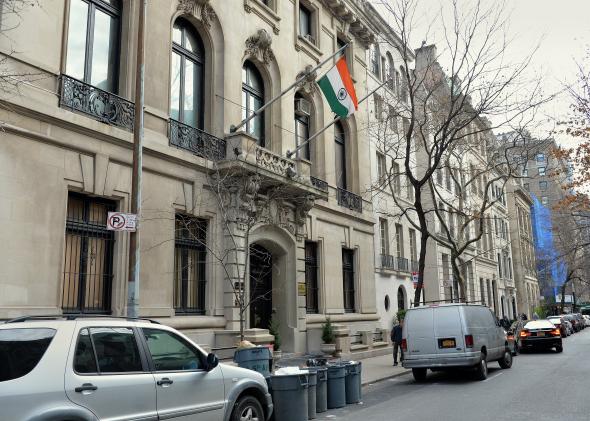 New York, Dec 1 (IANS) After a successful ‘swachh consulate’ (clean consulate) drive, the Indian mission in New York is now looking into restoration and renovation of the heritage building to bring it back to its former glory.

A part of New York’s Upper East Side Historic District, the Beaux Arts street facade of the consulate building built in 1903, is constructed of Indiana Limestone with a mansard roof of blue slate.

The design is in the manner of French architects Percier and Fontaine, who revived the French Renaissance style of Hardouin Mansart, according to the consulate website.

Built as a private residence for Carrie Astor (later known as Orme Wilson), it was bought by the Indian government in 1950 and came to be known as New India House. It has since housed the Consulate General of India.

The New York mission in fact had a head start with its own cleanliness drive initiated in April 2013 much before the Oct 2 launch of Prime Minister Narendra Modi’s Swachh Bharat campaign.

The consulate is also reported to be in talks to hand over a collection of informative videos and documentaries to the New York University for archival.

As part of the drive initiated by Consul General Dnyaneshwar Mulay, paperwork older than three decades, decrepit equipment and potential bio-hazards, which were occupying precious space in the pre-war era building, were weeded out and destroyed.

Roughly 90,000 documents were scanned and digitised daily in the first few months, to salvage paperwork that was still required for reference, according to the consulate.

With a large area becoming available after the clean up, the consulate is planning to organize free Yoga, Hindi and dance music classes, specially targeting the mainstream community and the second generation of Indian Americans.

The consulate has also initiated several new activities, including a high-profile monthly ‘MediaIndia Lecture Series – 2014-15’, various economic and cultural events focusing on States of India, as also outreach with the community.

The Consulate is striving hard to bring the mainstream into its fold so as to improve bilateral relations, particularly in investment, collaborations, commerce and tourism, according to Mulay.