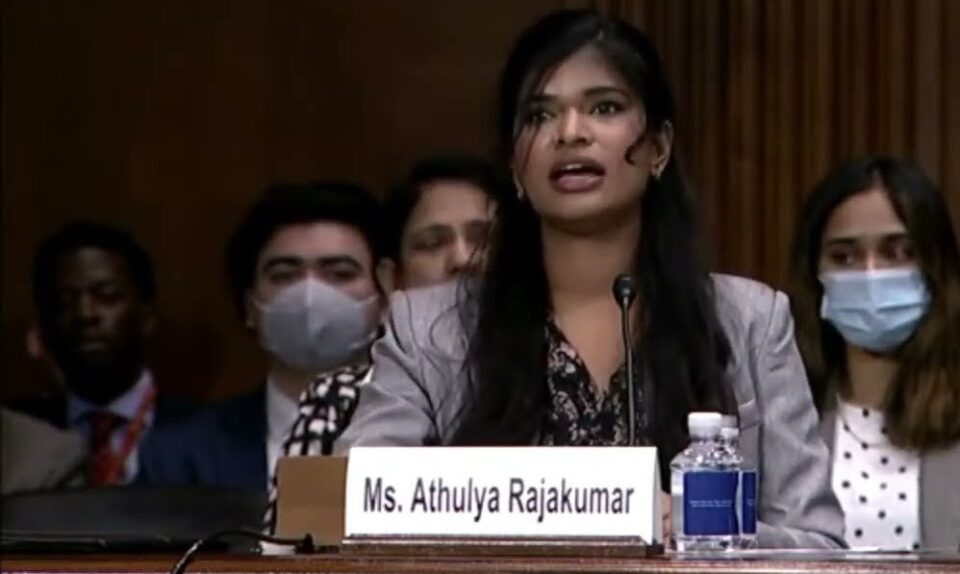 Washington, DC, March 21, 2022: Athulya Rajakumar, a 23-year-old Indian-American Documented Dreamer has told lawmakers that she is an American and hopes to be recognized as one and not forced to leave her mother and the only country she has called home for nearly 20 years.

“Without congressional action that creates a clear, reliable pathway for me to apply for permanent residency, in eight months, I will be forced to leave not only the country I have called home for nearly 20 years, but also my mom, who is my only family left,” she told the Senate Judiciary Subcommittee on Immigration, Citizenship, and Border Safety last week.

Most noncitizens who come to the United States on temporary work visas do not have a clear path toward permanent legal status. If their minor children come with them, those children face a dilemma. After turning 21 years old, they “age out” of the temporary legal status derived through their parents’ visas and confront the difficult choice of having to depart the United States or face potential deportation unless they can obtain a different temporary or permanent status themselves. These young people are referred to as “Documented Dreamers.” There are more than 200,000 Documented Dreamers in the United States, predominantly from India and China, according to the American Immigration Council.

Rajakumar is a recent graduate of The University of Texas at Austin and is currently living in Dallas, Texas. She is a member of Improve the Dream, a youth-led organization that supports and advocates for Documented Dreamers.

Here’s the full transcript of her testimony:

I was born in India, and when I was four and my brother was six, my mother left India and an abusive marriage behind, in search of a better life for us. After completing her master’s at the Queensland University in Australia, she was chosen to come to America on a cultural exchange student visa with us as her J-2 dependents. After graduating, she secured a full-time job at Microsoft, which then sponsored her H-1B work visa, with her children as H-4 dependents. Eventually, in 2012, she was finally able to apply for her green card with me and my brother as her dependents. After nearly a decade in the green card backlog, I aged out of that application in January of 2020, when I turned 21.

My single mother worked hard to support me and my brother on her own. Things were hard, yes, but still I remember making happy memories1 while building our new life here. I remember waiting in line at midnight for the fourth Harry Potter movie release; eating red, white, and blue Bomb Pop original popsicles on the Fourth of July; driving through neighborhoods to look at Christmas lights; and watching my first baseball game at the Nationals Stadium just a few miles from here. I still remember knocking my nachos and soda all over me as I stood up to cheer when the Nationals hit a homerun. These experiences, uniquely American, are not only unforgettable but a part of who I am today.

As a child, I did not always understand the meaning behind the letters and numbers surrounding our immigration status, but it was clear to me that they were imperative to legally remaining in this country. I learned very young that every aspect of my entire life would be controlled and overshadowed by my visa status. I became used to opportunities being taken away by a factor out of my control. I could not participate in my high school’s AP French exchange program even though I was president of the French Club, because I could not legally leave the country with a guaranteed ability to return. When I applied to colleges, I was considered an international student, even though I completed first through 12th grade in America. I had to take additional tests and write extra essay prompts that asked questions like “What can you contribute to our institution as a resident from your country?” – to which my only response was, “I grew up in Seattle, Washington; Starbucks was founded here. I don’t know how much more American I can get.” I did not qualify for any federal or university financial aid, though my mother was a single parent and we lived within financial circumstances that should have qualified us for aid.

Regardless, I worked hard, earned good grades, took every test, and wrote every essay, to get direct admission not only to my dream university, but my dream program at The University of Texas at Austin’s Moody College of Communication’s prestigious journalism program – to pursue my long-term goal of becoming a journalist, and to use my voice to advocate and bring awareness to issues I was passionate about.

India restores 10-year and e-tourist visas for US nationals

Covid’s not gone, expect uptick in cases due to BA.2 subvariant: Fauci