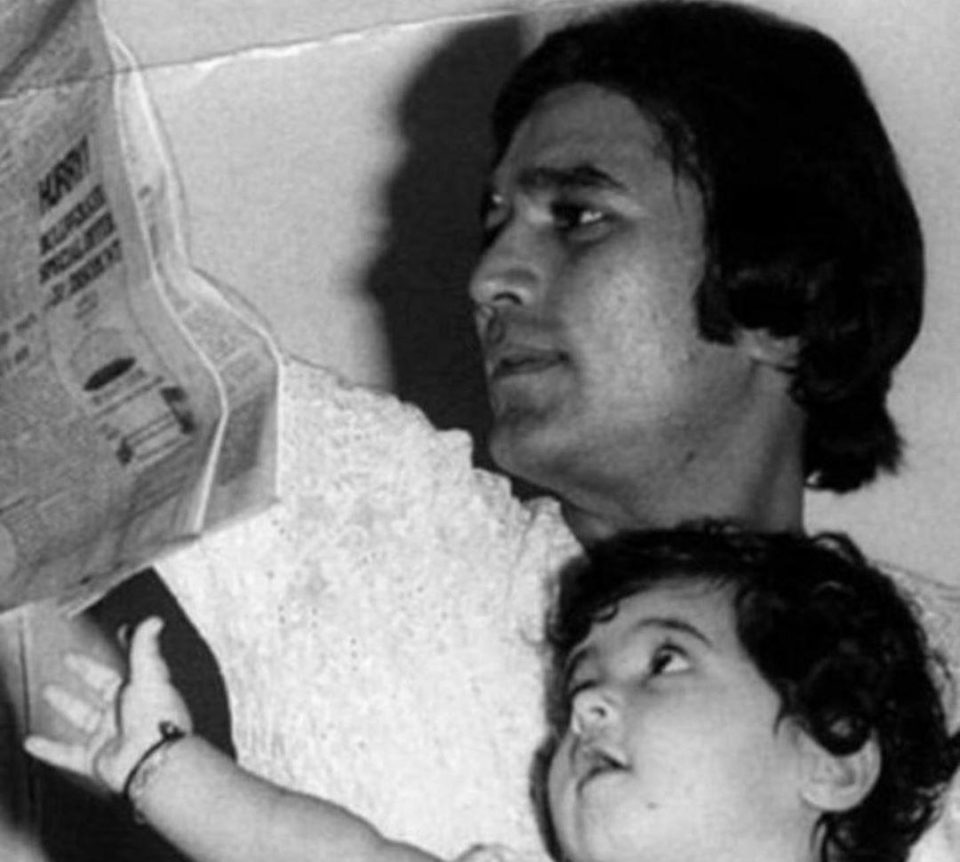 Mumbai, June 20 (IANS) Ahead of Father’s Day on June 21, Twinkle Khanna has penned a note remembering her father, the late superstar Rajesh Khanna.

In the lengthy post, Twinkle has shared a lot of moments she spent with her father. From tasting alcohol with him to exchanging relationship advices, Twinkle spoke about many things that define their bond.

“Father’s Day, for me, will always be in December. If my father hoped for a boy as his firstborn, I was never told. All I know is what he said to my mother: That I was the best present she could have ever given him as I entered the world, feet first, on his 31st birthday.

“He always called me Tina baba, never baby, and though I didn’t realize it at that point, my upbringing was different from all the other young girls around me. The restrictions drawn around their adolescence did not define mine. The permanent marker, one that would later be passed onto their husbands, to enforce the circle of captivity did not exist in my case,” Twinkle wrote on her website Tweak India.

“He was the one who gave me my first sip of alcohol, Scotch on the rocks in a glass too heavy for my hand. I was permitted to peer into the living room with its shaggy white carpet and its bejewelled people. The light from the chandelier was diffused by the smoke that enveloped the room like a diaphanous veil, then the epitome of liberated sophistication.

“…When I started dating, we exchanged advice. He told me that he was looking for a partner who would lie down in his lap as they would read the same book together.I laughed, “Dad, this is never going to happen. Your expectations are ridiculous. What if they read slower than you or want to take a break? Just find a decent woman who can tolerate your nonsense and that should be enough,” Twinkle wrote.

Wittily, she recalled how Khanna had once asked his daughter to have “four boyfriends at a time”.

“Don’t have one boyfriend,’ he once said to me, “always have four at a time. That way your heart will never be broken.”

“A suggestion that held me in good stead, though I never told him that the only man who had the power to break my heart was my father,” she said.

Twinkle also spoke about the “goodnight” ritual she along with her younger sister Rinki followed with their dad.

“He always had time for us though. Each night he would come to our bedroom, wearing a striped nightshirt with ‘I love San Francisco’ embroidered over the front pocket. “Good night, sweet dreams, love you, miss you,” he would say. My sister and I would repeat the same. A nightly ritual that never changed, not the words or the sequence in which they were said,” Twinkle recalled.

Twinkle also explained the importance of a father’s role in his daughter’s life.

“A daughter needs her father’s presence in her life for many reasons. What she needs most is to know that she has someone to lean on, to depend upon, besides herself.

“My father may not have been standing by my side, holding my hand through every stage of life, but somewhere deep inside, I knew that I could count on him. When he looked at me, regardless of how angry he was, there was a singular reflection, one that never faltered — his complete belief in me,” she emphasised.

Interestingly, Twinkle shares her birthday with her father on December 31. Narrating a funny anecdote of how as a child she was convinced that all the truckloads of flowers that would arrive for Rajesh Khanna’s birthday were actually for her.

“I would sit on the stairs; the December air sometimes cool enough to wear a sweater and watch the trucks filled with flowers entering the gate. They were of course, for him, but all of eight, I thought they were for my birthday,” she shared.

“It is lurking within every birthday when I wake up in excitement before my heart sinks. The man who loved words, always used them in a precise order. These things could not be tampered with, replaced or changed. Just the way he didn’t like anyone moving his books, glasses and packets of Dunhill.

“Year after year, he said the same thing. Something that no one else can ever say again, ‘Happy birthday to you too, Tina baba. Father’s Day may be this Sunday, but for me it will always be in December,” Twinkle concluded.