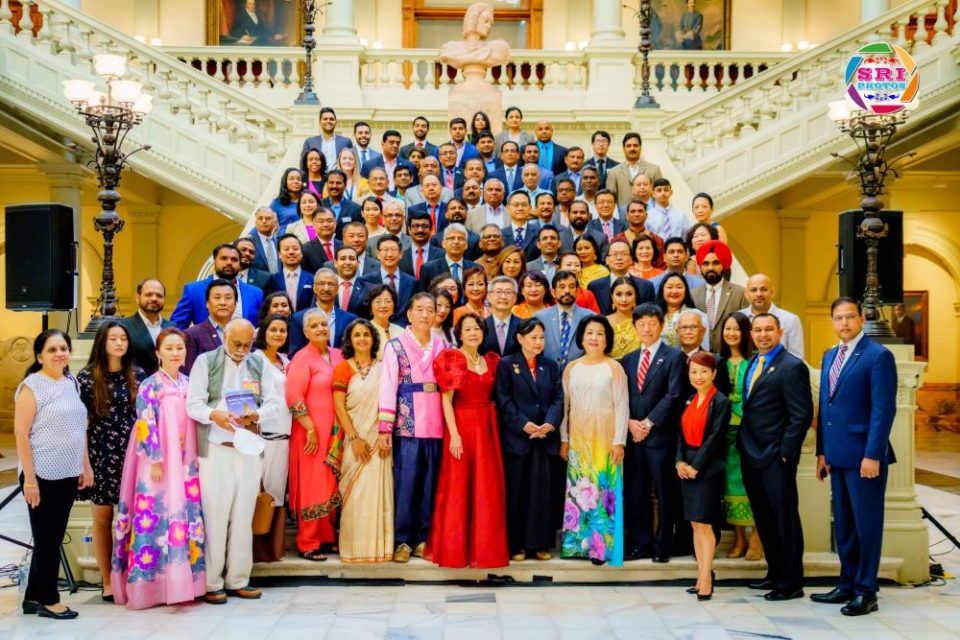 Atlanta, GA, May 24, 2019: The North Wing steps of State Capitol buzzed with activity as traditionally clad members of Asian-Pacific communities gathered to celebrate traditions, history, native languages, and unique experiences represented by Asian-Pacific Americans across the country and the state of Georgia on May 22, 2019. Governor Brian Kemp signed a proclamation that recognizes the contributions of people of Asian- Pacific descent while declaring May 2019 as Asian-Pacific American Heritage Month.

“Today is a very special day. The Governor has been very deeply rooted and engaged with the Asian – Pacific American community at large and wanted to show his appreciation and requested to make a proclamation that shows and embodies the level of love and support that he has for these communities. He also wanted to showcase the fact that contributions from these communities are second to none,” said Ritesh Desai. Desai serves on Governor Brian Kemp’s Georgians First Commission, which is an 18-member panel that looks for ways to streamline government regulations to foster and nurture small business growth across the state.

“Asian – Pacific American community has contributed to all facets of life in Georgia, including arts, culture, heritage, business, education and this is a recognition of their contributions, Throughout our history, Asian-Pacific Americans have made significant contributions to the collective heritage and quality of life in the state of Georgia. The peach state is fortunate to be home to over 300,000 citizens with Asian-Pacific American heritage. According to US census, this community, is one of the most diverse and fastest growing groups in the US,” states the proclamation.

The origin of Asian/Pacific-American Heritage Month dates back to the 95th Congress (1977-1978) when five joint resolutions were introduced proposing that a week in May be designated to commemorate the accomplishments of Asian/Pacific Americans.

In June 1977, Reps. Frank Horton of New York and Norman Y. Mineta of California introduced a House resolution to proclaim the first ten days of May as Asian-Pacific American Heritage week.

Senators Daniel K. Inouye and Spark Matsunaga from Hawaii introduced a similar bill in the Senate, both of which were passed and on October 5, 1978.

In 1990, President George H. W. Bush signed a bill passed by Congress to extend the week-long celebration to a month-long celebration. In 1992, the official designation of May as Asian-Pacific American Heritage Month was signed into law.

The month of May was chosen to commemorate the arrival of the first Japanese immigrants to the United States on May 7, 1843, and to mark the anniversary of the completion of the transcontinental railroad on May 10, 1869. The majority of the workers who laid the tracks were Chinese immigrants.

BAPS Swaminarayan Mandir enlightens community through the celebration of Diwali

these people are opportunists