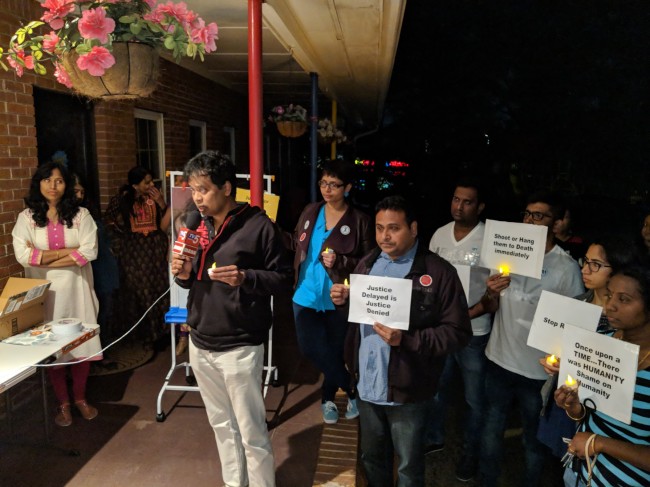 File photo of the candlelight vigil held in Atlanta for the Kathua and other sexual crime victims.

New Delhi, May 18 (IANS) The Delhi High Court on Friday asked the parent company of Google, Facebook, Twitter, YouTube and Bing to file a response after they disclosed the identity of an eight-year-old girl who was raped and murdered in Jammu and Kashmir.

The direction from acting Chief Justice Gita Mittal and Justice C. Hari Shankar came after their Indian subsidiary apprised the bench that they were not the concerned entity to respond to the court’s query.

The court observed that several Internet platforms and social networking sites were extensively displaying the photographs and name of the victim.

Google and other social media platforms have done a great disservice to the nation by uploading contents which revealed the identity of the minor victim, the bench said.

The bench said that the entities cannot absolve themselves for such activities and maintained that the law was the same for everyone.

Meanwhile, the court stayed the proceedings initiated by the Press Council of India (PCI) against some of the media houses for disclosing the identity of the victim.

The court last month directed 12 media organisations to pay Rs 10 lakh each as compensation for disclosing the identity of the eight-year-old girl who was killed in Kathua.

The court had observed that there were long term repercussion to the victim’s family, especially for the women members, due to such reporting.

The court said they had violated law and were punishable under Section 228-A of the Indian Penal Code.

The minor in Kathua was held captive and sedated before being repeatedly raped and murdered.