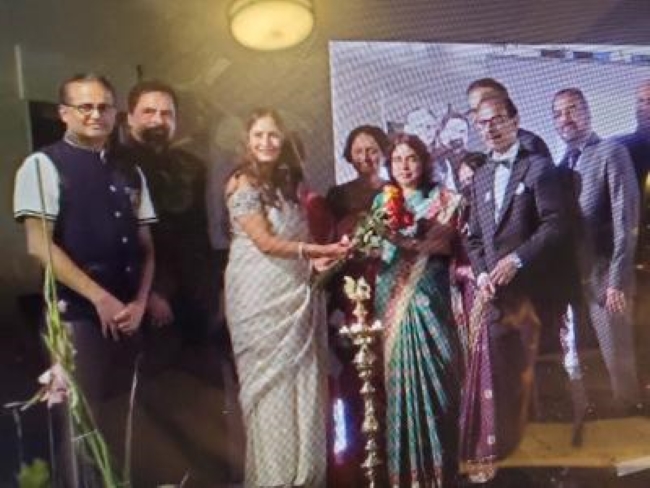 Honorable Consul General of India in Atlanta, Swati Kulkarni introduced Dr. Jonnalagadda and offered her best wishes to the President of AAPI during the 1st ever Virtual Change of Guard Ceremony that was live cast on social media platforms around the world. In her address, she praised Dr. Jonnalagdda for his leadership and contributions to the society. Describing AAPI as a world leader in Medical Education and Healthcare Delivery, Dr. Kulkarni urged AAPI to be more politically active.

In his acceptance speech, Dr. Jonnalgadda has vowed to take the nearly four decades old organization to the next level and “bring all the AAPI Chapters, Regions, Members of the Executive Committee and Board of Trustees to work cohesively and unitedly for the success of AAPI and the realization of its noble mission.”  He wants to increase AAPI membership by offering more benefits and opportunities for mem­bers.

“AAPI has given me so much — networking, advocacy, and education — and I am honored to serve this noble organization.  I sincerely appreciate the trust you placed in me as the President of AAPI, and I am deeply committed to continue to work for you,” declared Dr. Sudhakar Jonnalagadda, the new President of AAPI.

Dr. Jonnalagadda will lead AAPI as its President in the year 2020-2021, the largest Medical Organization in the United States, representing the interests of the over 100,000 physicians and Fellows of Indian origin in the United States, serving the interests of the Indian American physicians in the US and in many ways contributing to the shaping of the healthcare delivery in the US for the past 39 years. “AAPI must be responsive to its members, supportive of the leadership and a true advocate for our mission,” he said.

Dr. Suresh Reddy, the out going President of AAPI through a video, presented some of the major accomplishments of his presidency under unique circumstances. Expressing gratitude to the AAPI fraternity for entrusting the role of leading AAPI, Dr. Reddy said, AAPI is stronger and is in safe hands, as he passed on the traditional gavel and the coat to the new President of AAPI.

Dr. Seema Arora, the out going Chair of AAPI Board of Trustees, shared her experiences while working with a dedicated Team of AAPI leaders, contributing to strengthen AAPI and help AAPI reach greater heights.

Dr. Sajani Shah, the very first to be a second generation physician of Indian origin, assumed charge as the Chair of AAPI Board of Trustees. In her inaugural address, she promised to work with the entire AAPI Body, and help AAPI realize its mission.

In his opening remarks, Hon. Amit Kumar, Consul General of India in Chicago and the Chief Guest at the event praised the contributions of Indian American Physicians. He lauded the efforts of AAPI especially during the COVID pandemic. He urged AAPI to collaborate in pharma sector and Ayushmaan Bharat as well as in telehealth related issues providing guidelines in collaboration with the MCA of India. While lauding g Dr. Reddy for his great accomplishments during the year of pandemic, Mr. Kumar offered his best wishes to the incoming President of AAPI, Dr. Jonnalagadda and Team.

A visual presentation of the history of “Change of Guard” took the AAPI members down the lane through its 37 tears of great historical growth under AAPI leaders. Earlier the event began with an Inter-Faith Prayer and Meditation, led by leaders of various Faiths and praying for several AAPI leaders who have been critically ill due to the pandemic and those who have lost their lives.

Dr. Jonnalagadda was born in a family of Physicians. His dad was a Professor at a Medical College in India and his mother was a Teacher. He and his siblings aspired to be physicians and dedicate their lives for the greater good of humanity. “I am committed to serving the community and help the needy. That gives me the greatest satisfaction in life,” he said modesty.  Ambitious and wanting to achieve greater things in life, Dr. Jonnalagadda has numerous achievements in life. He currently serves as the President of the Medical Staff at the Hospital. And now, “being elected as the President of AAPI is greatest achievement of my life,”

Dr. Jonnalagadda wants to emphasize the importance of Legislative Agenda both here in the US and overseas, benefitting the physicians and the people AAPI is committed to serve. According to him, “The growing clout of the physicians of Indian origin in the United States is seen everywhere as several physicians of Indian origin hold critical positions in the healthcare, academic, research and administration across the nation.” He is actively involved with the Indian community and member at large of the Asian Indian Alliance, which actively participates in a bipartisan way to support and fund electoral candidates.

His vision for AAPI is to increase the awareness of APPI globally and help its voice heard in the corridors of power.  “I would like to see us lobby the US Congress and create an AAPI PAC and advocate for an increase in the number of available Residency Positions and Green Cards to Indian American Physicians so as to help alleviate the shortage of Doctors in the US.” .

A Board-Certified Gastroenterologist/Transplant Hepatologist, working in Douglas, GA, Dr. Jonnalagadda is a former Assistant Professor at the Medical College of Georgia. He was the President of Coffee Regional Medical Staff 2018, and had served as the Director of Medical Association of Georgia Board from 2016 onwards. He had served as the President of Georgia Association of Physicians of Indian Heritage 2007-2008, and was the past Chair of Board of Trustees, GAPI. He was the Chairman of the Medical Association of Georgia, IMG Section, and was a Graduate, Georgia Physicians Leadership Academy (advocacy training).

“AAPI and the Charitable Foundation has several programs in India. Under my leadership with the pioneering efforts of Dr. Surender Purohit, Chairman of AAPI CF, we will be able to initiate several more programs benefitting our motherland, India,” Dr. Jonnalagadda said.

Dr. Jonnalagdda expressed gratitude to his predecessor, Dr. Suresh Reddy and Dr. Anupama Gotimukula and the current Team for initiating the AAPI Endowment Fund, which he plans to strengthen during his presidency, making AAPI financially viable and stronger in the years to come.

In all of his efforts, Dr. Jonnalagadda wants to work with his executive committee and all branches of AAPI membership in a congenial and non-competitive manner, focusing on the noble mission of this prestigious organization. His experiences in organizing conferences and meetings which help to bring members together and attract new members is vital to the success of the organization.

Dr. Jonnalagadda is committed to upholding and further augment the ideals for which AAPI stands. “I am confident that my experience, work ethic and firsthand experience in organizing Conventions and fundraisers are best suited to carry on the responsibilities and lead this noble organization to new heights.”

AAPI represents more than 100,000 physicians and fellows of Indian Origin in the US, and being their voice and providing a forum to its members to collectively work together to meet their diverse needs, is a major challenge.

With the changing trends and statistics in healthcare, both in India and US, we are refocusing our mission and vision, AAPI would like to make a positive meaningful impact on the healthcare delivery system both in the US and in India.

AAPI will continue to be an active player in crafting the delivery of healthcare in the most efficient manner in the United States and India. “We will strive for equity in healthcare delivery globally.” Dr. Jonnalagadda is confident that with the blessings of elders, and the strong support from the total membership of AAPI and his family, he will be able to take AAPI to stability, unity, growth and greater achievements.”