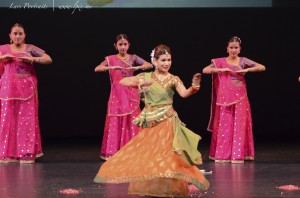 Atlanta, GA: Geet-Rung School of Dance and Music presented its second program of the year on Sunday May 12th at the Gwinnett Performing Arts Center. This time it was a dance recital as a fund-raising event for St. Jude Children’s Hospital and was attended by over 500 patrons on this Mother’s Day afternoon. Geet-Rung organized the Music Recital in February to benefit the non profit organization ‘Ekal Vidyalaya’. 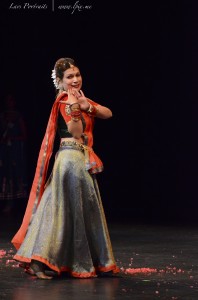 Divya Srivastava, the heart and soul of Geet-Rung and its director, had spent six months of preparations and rigorous rehearsals in producing a dance drama called ‘Journey of Kathak’. This 50-minute splendid kathak ballet was presented as the first item of the evening and involved over 65 participants ages 5-35. It was truly ‘…experience the ultimate’ through the ‘journey of Kathak’ said the audience.

Kathak is the most popular art form in Northern India which originally used to be performed in temples to express dedication to Hindu gods and had flourished over the decades under the patronage of regional princes. Kathak slowly evolved into two main gharanas – Jaipur Gharana and Lucknow Gharana. Lucknow Gharana of Kathak places emphasis on the expressional qualities of dancing while the Jaipur gharana became renowned for highly intricate and complex footwork, and fast, sharp, accurate dancing.  Many emperors and princely rulers have contributed to the growth and development of Kathak. Nawab Wajid Ali Shah of Oudh is mainly credited for the growth of this dance form as the classical art form. Kathak dance attained new heights of popularity and glory under his expert guidance and lavish patronage.  Kathak had strong influence on the Hindi Cinemas and have given us many mesmerizing performances in films like Mughal-e-Azam, Pakeezah, Umrao Jaan, Devdas to name a few. 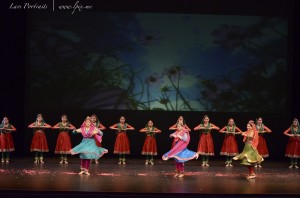 Divya’s journey of Kathak was presented in five beautiful scenes – narration before each scene by Sangita Sharma aptly described the content of it that helped audience better understand the following scene. The changing slides backdrops beautifully coordinated with the performances going on the stage. Music was outstanding and embellished dancer’s rhythmic elements, footwork and expressions. Divya opened the ballet with the Ganesh Vandana with the ‘diya’ in her hands while the youngest class of the play offered flowers in harmony to the music. The young beginner student are not given the chance to be a part of the kathak play, says Divya as it takes atleast a year of the classical training for them to get ready from mind and body and to learn the discipline and grace even to stand and maintain a pose on stage.  One of the scenes out of the five presented the court scene of Nawab Wajid Ali Shah played by Raza Shah, in which a thumari was enacted and danced by Divya. The ballet ended with a fusion piece characterized by kathak spins. Brilliantly choreographed by Divya, the music was composed by well known artists in India based on the script that she writes and details the nuance of each scene. The play inspired some of the classes inclined towards the Bollywood dances only to learn Kathak as they wished to dance and be a part of such plays in future recitals at Geet-Rung.

After the journey of Kathak, more dances by various groups were presented by the students that lasted for another hour. They were Tum hi ho bandhu, Nach le ve, Jiya Jiya re, Panghat pe nache, Radha teri Chunari, Gungun Guna re, Jogan Jogan, Mayya Yashoda – all in the praises of Radha and Krishna. A couple of peppy numbers were also presented by few classes.

Pankaj Bhargava rendered a classical song ‘ka karoon sajni’  in rag bhairavi which was then followed by a duet ‘kajra mohabbat wala’  by Pankaj and Swapana Kumthekar (Hindustani vocal teacher at Geet-Rung) danced by Aekta Patel, Savitha Anand, Shweta Shetty, Tania Srivastava. The program ended with the finale ‘disco deewane’ that brought all the students on the stage followed by Divya’s vote of thanks.

Divya extended her thanks to all her students, their parents and countless volunteers who had put in hard work behind stage to make the program a huge success. She also thanked all students for raising funds for St. Jude and understanding the important role they play in helping the children suffering with various diseases, with their talents. She also wished happy Mother’s Day to all the women. The program was interestingly and creatively put together by the Emcees of the evening Aqsa Farroqui and Sunny Sachdeva.  Student of the year medals were awarded to Shree Delwadia, Khyati Sehgal, Rani Patel for highest scores earned in the Kathak exam years. She also acknowledged the dance teachers at Geet-Rung, Savitha Anand and Aekta Patel. Trophies were awarded to all the students and gifts to the sponsors and volunteers. The whole program lasted for three hours and the audience enjoyed every moment of it.

Light and sound control for the program were by Navin Tyagi. Backstage management was by Nida Shariff and Kritika Subramaniam. Photography and backdrops were done by Lavanya Palaparthy.