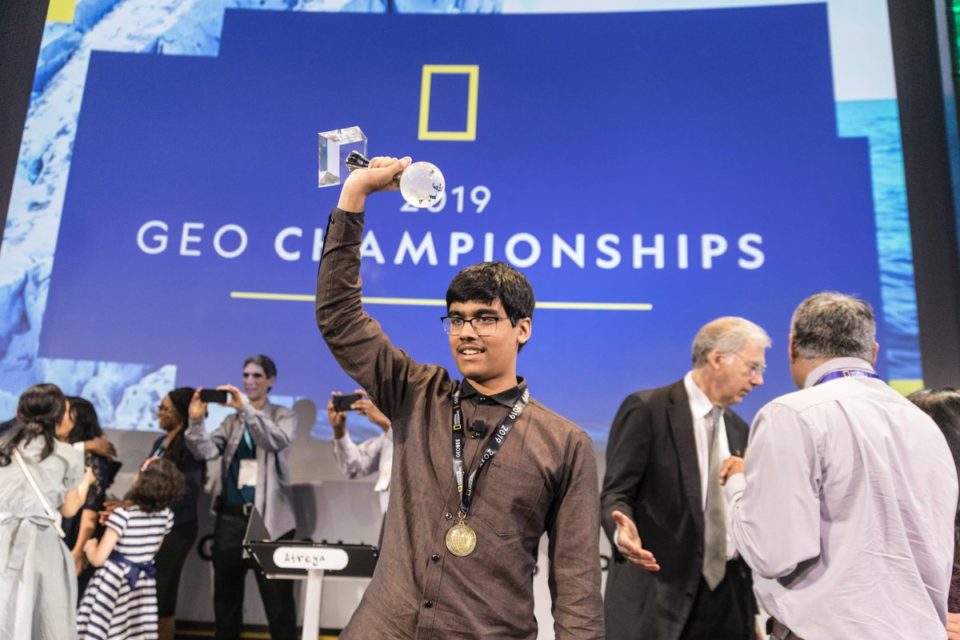 Atlanta, GA, May 28, 2019: Texas eighth grader Nihar Janga beat out 53 other geobee state champions to win the title of National Geographic Bee Champion Wednesday. This was his second bee championship win. Back in 2016, as an 11-year-old, Janga became the youngest competitor ever to win the Scripps National Spelling Bee.

The final round of the Geographic Bee championships went into overtime. The two finalists tied for five rounds in a row until they reached the final question.

Janga’s winning question was: “More than one-third of Norway’s northernmost county is located on what plateau?”

His correct answer was, “Finnmark Plateau.”

Janga now hopes to compete in the International Brain Bee as a high schooler.

We are SO proud of all of the #NatGeoBee and #NatGeoChallenge students. This year they demonstrated a deep commitment to understanding & improving the world around them. Their passion is inspiring! Watch the recording of the 2019 Geo Championships Finals.https://t.co/MZAbMZ88NE pic.twitter.com/GAP9HpGEAb

According to the contest’s organizers, Janga will receive a $25,000 college scholarship, a lifetime membership in the National Geographic Society, and a trip to the Galápagos Islands.

The GeoBee, first developed by the National Geographic Society in 1988 to promote geographic knowledge in the United States, is an annual academic competition that involves students in grades four through eight from nearly 10,000 public, private and home schools.