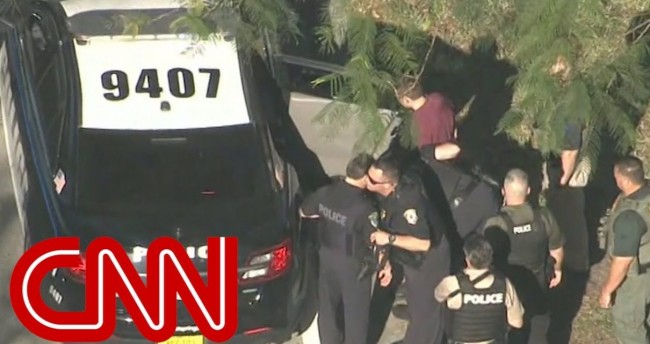 Atlanta & Washington, Feb 15 (IANS & Staff): An Indian-American student is among those injured in a shooting in a Florida school where at least 17 students and teachers were killed as a heavily-armed 19-year-old went on a shooting spree outside and inside his former high school. The shooter was arrested an hour later.

Among students at the Parkland school are many Indian-Americanss and at least one student, a ninth grader, suffered minor injures after he was hit by splinters. He is being treated at a hospital.

“This is a sad day for the country and the community. We all Indian-Americans are praying for the victims,” said Shekar Reddy, whose friend’s son was among those injured in the mass shooting, reports PTI.

The gunman, armed with a semi-automatic AR-15 rifle, was identified as Nikolas Cruz, who had been expelled from the school for “disciplinary reasons”, the New York Times reported.

He began his rampage outside the school shortly before dismissal time around 2.40 p.m. He then made his way inside and proceeded down hallways, firing at frightened students and teachers who were scurrying for cover.

Students huddled in horror in their classrooms, with some using their phones to share the massacre on social media. Footage showed sprawled bodies, screams and gunfire that began with a few shots and then seemed to go on and on.

The mass murderer was arrested at Coral Springs, a neighbouring city, about an hour after fleeing the scene, the authorities said. He had slipped out of the building by mixing in with crowds of panicky students.

In addition to the rifle, Sheriff Israel said Cruz had “countless magazines”.

Students recalled terror and confusion in the aftermath of the shooting. An English class was going on when the shooting began.

“We had a fire drill early in the day, so we really didn’t know what was going on,” said Ryan Kadel, a 17-year-old student. “We went outside and we saw a security guard on a golf cart driving really fast and yelling at us to run.”

The gunman had clearly prepared for the attack, Senator Bill Nelson of Florida said after speaking to the FBI, the Times said.

“The shooter wore a gas mask, had smoke grenades and he set off the fire alarm so the kids would come out of the classrooms,” said Nelson.

Sheriff Israel said he did not know the gunman’s motive. He said a football coach was among the dead. Twelve of the 17 dead had been identified by Wednesday night.

His Instagram account showed several photos of guns. One appeared to show a gun’s holographic laser sight pointed at a neighbourhood street. Another showed six rifles and handguns laid out on a bed. The most disturbing appeared to show a bloodied dead frog.

Jim Gard, who was Cruz’s maths teacher at the school in 2016, said the student appeared to be a “quiet” one. He said that after the shooting, he learned from several students that Cruz was obsessed with a girl at the school to the point of stalking her, the Washington Post reported.

The shooting, among the 10 deadliest mass shootings in modern US history, revived debate over gun control while American politicians offered their condolences.

“My prayers and condolences to the families of the victims of the terrible Florida shooting. No child, teacher or anyone else should ever feel unsafe in an American school,” US President Donald Trump said.