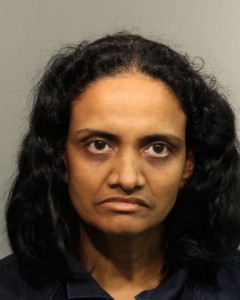 Atlanta, Jan 31 (IANS & News Sources): The attorney for Sujatha Guduru, the Oveido, FL mother accused of murdering her 17-year-old daughter in a failed homicide-suicide said today that she has been mentally ill for most of the last 20 years and may plead insanity, the Orlando Sentinel reports.

In court this afternoon, Guduru spoke softly when Seminole County Judge Fred Schott asked a series of routine questions. Her attorney, Brian Bieber, in a brief hearing, said Guduru needed mental health evaluation and care. He said she had been hospitalized and under the care of medical professionals and had been prescribed psychotropic drugs for mental health issues for much of the last 20 years.

“Unfortunately Ms. Guduru has been tortured by her mental health issues for much of the last 20 years,” the Orlando Sentinel quoted Bieber as saying.
Bieber hinted that because of her mental health history, Guduru should not have been able to purchase the .380-caliber revolver at a local gun shop six days before the shooting, the report added.

According to the arrest affidavit, Sujatha Guduru, 44, shot her daughter Chetana Guduru twice, fearing there would be no one to care for the girl after the mother’s suicide, www.myfoxorlando.com reported. 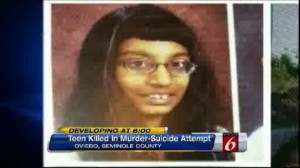 The distraught, suicidal mother admitted to police in Oviedo, a small town in Florida, that “she intended to commit suicide and that she did shoot her daughter as well,” Lt. Mike Beavers was quoted as saying.

Police believe Sujatha had been planning the murder-suicide for weeks, recently buying a .38 caliber revolver, writing a last will, and detailing her plans in an email to her brother. He didn’t see it until it was too late.

Chetana’s father, Rao Guduru, was not home at the time of the incident and drove Monday from Atlanta to be with his family, the Orlando Sentinel said.

Police are still looking for answers as to why Guduru allegedly killed her daughter, then turned the gun on herself.

Oviedo Police said Guduru will survive, and she was being guarded by Orange County corrections officers while she recovers at Orlando Regional Medical Centre.

Once she is medically cleared, she will be taken to the Orange County jail on first degree murder charges and then extradited to Seminole county.

Website wftv.com cited defence attorney Robert Buonauro as saying there will most likely be a competency hearing for Sujatha Guduru and that it was unlikely she will go to trial.

“If she is incompetent to proceed and then the experts indicate she was legally insane at the time of the act, there is a good change this case won’t go to trial,” Buonauro was quoted as saying.

According to the Sentinel, Chetana’s academic talent earned the Oviedo girl acceptance into a variety of colleges, but it also garnered the admiration of her Seminole High School fellow seniors.

The girl’s funeral, a private Hindu service was held this morning at an Orlando funeral home.

South Asians confront Chevron refinery; link it to floods in India and Pakistan