Many of us find ourselves gaining weight as we get older. Many have come to believe that being overweight is a part of growing old. But this is not true. In traditional societies without surplus agricultural products and processed food, people tend to stay slim to their last days. I remember my grandmother who lived to the age of 90 becoming leaner as she aged, and she stayed free from all diseases till the fatal pneumonia.

The body contains fat cells known as adipocytes distributed all over the body. They get bigger with excess calories, and the fat cells are evenly distributed all over the body. This type of fat distribution is called peripheral obesity. It is also called pear-shaped obesity as more fat is stored around the hips and buttocks. The peripheral obesity is less severe as it is the job of fat cells to store the excess fat. Many people however, gain the excess weight around their abdomen. Their fat is deposited around the organs and muscles. The fat around the organs is called visceral fat and is more dangerous than peripheral fat. As visceral fat causes the bulging of the abdomen, it also called apple-shaped obesity, pot belly or beer belly.

Organs are not designed to store fat. Excess fat inside and around the organ compromises their biological function leading to metabolic problems. The bulge around the abdomen means that the excess fat is accumulating inside the kidney, liver, pancreas, and heart. The main culprit for abdominal obesity is hyperinsulinemia. The excess calories from carbohydrates and proteins trigger insulin release, which converts excess glucose to visceral fat. Let us see how the abdominal fat compromises organ function:

Liver: Fatty liver is a severe disease in itself. In the past, fatty liver was commonly associated with alcoholic liver disease. But now we know that excess calorie consumption can be deposited as fat in the liver. These calories can come from carbs, alcohol or beer; hence abdominal obesity is also called pot belly, or beer belly. When there is excess fat in the liver, the liver can no longer accept any new glucose, and hence it will resist the action of insulin, leading to insulin resistance. When insulin fails to push the excess glucose in the liver, the glucose will stay in the blood leading to high blood sugar also known as diabetes. Hence, abdominal obesity is the first sign of impending diabetes.

Kidneys: Excess fat can also deposit around the kidneys. This fat will impair the kidney’s ability to filter the blood, and flush the toxins out of the body. Excess insulin in the body also inhibits the uric acid secretion of the body. Thus, excess glucose consumption – triggering excess insulin release can lead to high uric acid levels in the body triggering gout and arthritis.  High insulin levels also promote more salt and water retention by the kidneys to cause hypertension and predispose to stroke and heart attacks.

Pancreas: The beta cells of the pancreas produces and releases insulin in response to glucose from carbohydrates, and amino acids from proteins. The insulin pushes the excess glucose and amino acids in the blood inside the liver and other organs. When the organs are already full of sugar and fat, they cannot accommodate any more glucose and resist the action of insulin.

The tug of war continues as pancreas releases more insulin to push the glucose inside the cells, while the cells are resisting the action. Over time, as fat gets accumulated inside the pancreas, they clog the pancreatic cells, resulting in an impaired release of insulin by the pancreas. Thus, in spite of excess glucose in the blood, the body is unable to produce insulin. This decrease in insulin production in the pancreas is the final stage of the diabetic disease process. At this time, patients will often require external insulin supplementation to keep the blood sugar under control.

Lungs: When we inhale air, the lungs expand both forward and downward with movements in the chest and abdomen. During deep belly breathing the diaphragm pushes the abdominal organs outwards to make room for the expanding lungs. This abdominal breathing is considered the healthier form of breathing. But when people have excess abdominal fat, there is less room for lungs to expand. As a result, most obese people are at risk of obstructive sleep apnea- a condition when you stop breathing and wake up breathless in the middle of the night. Sleep apnea can cause insomnia, depression, anxiety, fatigue, snoring, increased heart rate, increased blood pressure and decreased sex drive. Abdominal obesity is also a risk factor for asthma. Since obese people breathe in less air and have to take shallow rapid breaths- the airways over time become narrower and tighter.

Subcutaneous tissues– Fat also deposits in the subcutaneous tissues. These fat tissues called adipocytes are meant to store fat. But the fat cells are not inert. They are metabolically active. They secrete hormone leptin which tells the body not no eat anymore. Leptin inhibits hunger, burns fat, and helps to lose weight. However, surprisingly, obese people have high leptin levels. Why? It is because obesity is mediated by an excess of insulin action which promotes fat storage. The high insulin levels trigger more leptin release. High insulin helps fat storage, and high leptin supports fat burning. The tug of war continues between insulin and leptin, and as long as excess calories are consumed, insulin dominates. Moreover, when it comes to refined grains, and sweets- the body’s inbuilt hunger mechanism fails as processed foods bypass the satiety center. Hence, at the end of a buffet, we still have room for dessert, but not any more steaks. Over time, the high leptin levels lead to leptin resistance, and with the final brake on eating gone, obesity progresses unabated. Thus, the more obese you are, the hungrier you will feel, and the more you will gain weight.

Obesity predisposes to type 2 diabetes. When obese diabetic patients, take insulin, they gain more weight. External insulin does not eliminate the problem. The problem was with excess insulin action which was causing fat deposition around the organs. Bariatric surgery which removes visceral fat around the organs has been shown to reverse diabetes. This same effect can be accomplished by keeping the insulin levels low. Remember, excess insulin or hyperinsulinemia is the root cause of obesity — carbohydrates and protein consumption trigger insulin in a dose-dependent manner. There are three main ways to lower your insulin levels which will also remove the abdominal fat.

Fasting: Food triggers insulin release. When we fast, the body will burn the stored glycogen for 24 hours, and after that will burn stored fat. One reason people seldom became obese in traditional societies is due to their participation in the religious fasts. Fasting, like bariatric surgery, when done under medical supervision, can reverse obesity as well as diabetes as shown by Jason Fung inCanada, as detailed in his book ‘The obesity Code “.

Intermittent fasting: Food triggers insulin release. The more you eat, and the more frequently you eat, the more will be the insulin release. Eating one meal a day, also called intermittent fasting would also keep the insulin levels low throughout the day except for a few hours after your meal. Fasting may be difficult for many with busy life and responsibilities, but one meal a day 2-3 days a day is doable for many interested in weight loss.

Ketogenic Diet: A diet high in fat and low in carbohydrates will also lead to weight loss. Dietary fat is metabolized to ketone bodies which the body can use for energy, growth, and repair. The fat byproducts-ketones do not cause insulin release. Hence a diet high in fat will keep insulin levels low. Although counterintuitive, the more fat you consume, the easier is it to lose weight as long as you limit carbs and protein.

Exercise: Exercise keeps the insulin levels low. How? Glucose triggers insulin release. Exercise lowers blood glucose levels as during exercise glucose can be utilized by the body through a separate pathway which does not involve insulin. Mild exercise just after a meal like walking will lower both the blood sugar and blood insulin levels. If you cannot go for a walk after, consider doing 50 squats without weights after dinner as suggested by Tim Ferris in his book- 4-hour body.
Abdominal obesity can also be a problem in people with normal weight. There are many whose BMI is healthy, but they have the abdominal bulge or carry excess weight in the abdomen. I had that issue for some time. I have been doing exercise all my life. I noticed that after college, I began accumulating abdominal fat. I was perplexed. Then I realized that I used to eat three times a day along with frequent snacking on fruits and nut. Although my diet was healthy, my insulin levels were always running high. Then I switched to intermittent fasting, keeping my exercise levels the same- and lo and behold- I lost 10 pounds in 2 months. Although the weight loss was modest, it was sustained.

In summary, please take seriously any excess weight around the abdomen even if you are thin. The excess weight in the form of visceral fat poses the risks of increased blood sugar, blood cholesterol, blood triglycerides and, blood pressure. Thus, many people who have healthy weight gets surprised when they develop diabetes, vascular diseases, and heart problems. Weight around the abdomen is unhealthy irrespective of whether you are fat or thin, old or young. Make every effort to lose those extra pounds for a long and healthy life. 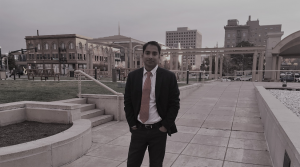 Dr. Panchajanya ‘Panch’ Paul, MD, ABIHM, ABPN, FAPA – is an American Board certified – Child, Adolescent, and Adult Psychiatrist. He is a diplomat of the American Board of Integrative and Holistic Medicine, and a Fellow of the American Psychiatric Association. He holds an adjunct faculty position at Emory University School of Medicine; Universityof Georgia, and University of Central Florida School of Medicine. He is the author of 2 books- Stress Rescue & Sleep Coaching available on Amazon. Call 7709789393 or email georgiapsychiatry@gmail.com to schedule an appointment with Dr.Paul.