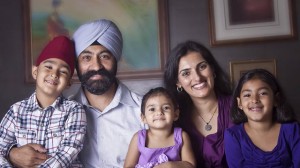 Featuring Waris Ahluwalia, a Sikh American actor and designer, the PSA demonstrates through words and images how Sikh Americans’ values are America’s values, including a love of service, family, and community.

According to Sikh American Legal Defence and Education Fund (SALDEF) which provided the script for the PSA, Comcast will donate $1 million in airtime on cable channels on Comcast to air it.

Comcast said it will air the PSA as part of the company’s commitment to educate audiences on a variety of issues.

Eastward Films served as art directors and producers for the film.

“Sikhs have contributed to America’s culture for the past 125 years, including helping to build the Panama Canal and railroads in California,” said SALDEF executive director Jasjit Singh while talking about the history of Sikhs in the US.

In fact, the first Asian American to serve in the US Congress, Dalip Singh Saund, was a Sikh American, he noted.

There is no better way for us to celebrate our history and day-to-day contributions in America this July 4th, Independence Day, than through a montage of images and words narrated from today’s most well-known Sikh American actor and designer, Waris Singh Ahluwalia, Jasjit Singh said.

“At Comcast, we know that timely, relevant information can inspire people and energize organizations to work toward change,” said Johnnie Giles, executive director of external affairs at Comcast.

SALDEF said it had received 400 photo and video contributions from Sikh Americans across the nation to use in the PSA.