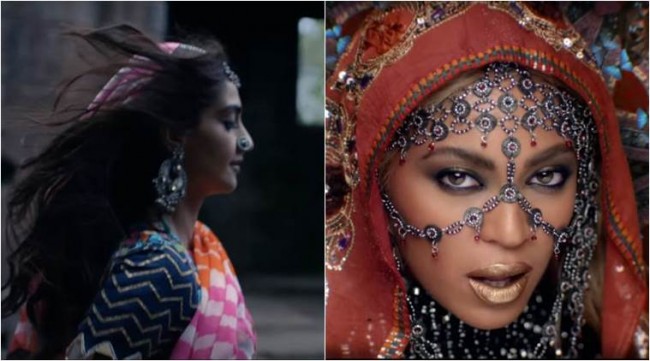 The video, which released on Friday, became a topic of debate among the Twitterati, with some calling it a “stereotypical” portrayal of the country.

While some slammed the video for cultural appropriation, others defended the Mumbai-shot video calling it as an appreciation of the foreign culture, reports billboard.com.

While Beyonce’s appearance dressed up as a Bollywood star faced a backlash, some pointed out that this isn’t the first time Coldplay has ‘used or misused’ Asian culture in its videos.

“Hymn for the weekend” is the latest single from the band’s new album “A Head Full of Dreams”. The video of the much hyped song seems to be a leaf out of a book on India, with Beyonce as a glamorous Bollywood diva and Sonam walking among ruins in an ethnic attire.

It also gives a sneak-peak into Indian classical dance forms, and features Coldplay’s frontman Martin enjoying touristy things — from exploring India with a ride in a ‘black and yellow’ taxi, and even in a boat on a ghat, to celebrating the festival of colours in Mumbai.

A user wrote: “Just because it’s Beyoncé, doesn’t mean she’s right. She is being offensive and appropriating our culture”, another user posted: “Cultural appropriation is about power structures just as with racism. How is Beyoncé, a black woman, offensively appropriating? ”

The video captures the essence of Mumbai, which is also known as the city of dreams, with visuals from its streets. The clip has been directed by Ben Mor. The Bollywood actress and international pop icon Beyonce are sporting creations by Indian designers.

Beyonce has also put henna on her hands and sports an ethnic outfit and jewellery.

“No thanks for the bundle of stereotypes @coldplay. No wonder then that India will be known as the country of snake charmers & sadhus,” a Twitter user posted.

Another user said: “@coldplay don’t exoticize us. You’ve been to the clubs and everything. Why do you want to make it seem like all we do is dance in the streets.”

However, there were praises as well. One user said: “Beyoncé showed India in many ways and made it look beautiful and lovely. She portrayed India excellently. As an Indian, I loved it”, another posted: “All this ‘cultural appropriation’ talk. If anything, the video showcases the beauty of India. No need for all the drama,” one user tweeted in support.

Passion for acting saved me from casting couch: Vidya Balan