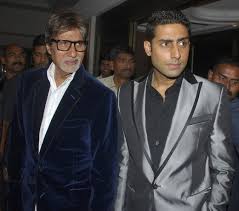 Ghaziabad, June 17 (IANS) A case has been filed against Bollywood star Amitabh Bachchan and his son Abhishek Bachchan in a Ghaziabad court, saying they were seen covering their bodies with the national flag in a manner insulting to the nation.

Complainant Chetan Dhiman in his complaint before the judicial magistrate’s court said the actors were seen with the national flag during the India-Pakistan World Cup cricket match in Adelaide on February 15.

Dhiman’s lawyer Sanjeev Sharma said the complainant and five of his friends saw the mega star wearing the national flag in an insulting manner.

He said that by such an act, the internationally acclaimed cine star and his son downgraded India’s reputation.

He said the actors’ act was covered under The Prevention of Insults to National Honour Act, 1971, and the Flag Code of India, 2002, and both should be summoned before the court to face trial.

Golfers Lahiri, Shiv look to impress at US Open