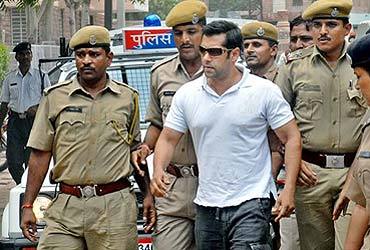 Mumbai, May 8 (IANS) In a major relief for Bollywood superstar Salman Khan, the Bombay High Court on Friday — while admitting his appeal — suspended his five-year jail sentence in a September 2002 accident case, paving the way for him to secure regular bail.

The interim bail granted to the actor by the high court two days ago has been extended and he will not be taken into custody pending disposal of his appeal against the lower court judgment, Gharat told media persons.

Later, Salman, accompanied by his team of lawyers, reached south Mumbai to complete the bail formalities at the sessions court after which he could return home.

In the high court, Justice Thipsay said that when the jail sentence is less than seven years, the sentence can be suspended after the appeal is admitted.

“It is the normal rule that when the sentence is below seven years, it can be suspended after the appeal is admitted. The sentence has to be suspended. We can’t take pleasure in seeing somebody incarcerated till the appeal is decided. Even on the basis that he was driving, it is a case for suspension of sentence,” he observed.

Observing that there are several other points raised by Salman’s defence in their appeal challenging the sessions court judgment, such as which provision of the Indian Penal Code — section 304A (death due to negligence) or 304 II (culpable homicide not amounting to murder) — could be applied in the case, Justice Thipsay said these “need consideration”.

While the first attracts a maximum punishment of two years’ jail, the latter, which was applied on the actor subsequently, entails a punishment of up to 10 years in jail.

Justice Thipsay, however, directed Salman to surrender his passport and apply for the court’s permission whenever he required to travel abroad.

Among other things, Justice Thipsay observed that there is no possibility of Salman absconding, if granted bail. He further said the appeal would be expedited and posted it for final hearing in July.

In nearly two hours of arguments before the high court, Salman’s lawyers, led by renowned advocate Amit Desai, said the prosecution had failed to examine singer Kamaal Khan as a witness, the defence did not get opportunity to cross-examine (now deceased) police bodyguard of Salman, Ravindra Patil, and that the accident on early September 28, 2002 was caused due to a tyre burst of the Toyota Land Cruiser.

Desai also raised questions on the conclusions of the lower court, including the number of people present in Salman’s vehicle at the time of the accident, and the testimony of Patil who was an “unwilling witness” whose statement was taken by police under duress by issuing a non-bailable arrest warrant against him.

Chief Public Prosecutor Sandeep Shinde strongly opposed the bail to Salman arguing that he (Salman) was drunk at the time of the accident and that the fourth person’s presence in the car was baseless and brought in as an afterthought.

On May 6, Additional Sessions Judge D.W. Deshpande found the actor guilty of all prosecution charges pertaining to the accident and later sentenced him to five years’ jail plus Rs.25,000 fine.

Meanwhile, celebrations broke out among thousands of Salman fans assembled outside the Bombay High Court, the sessions court and the Khan residence in Bandra west, with people dancing, singing, shouting with joy and distributing sweets.