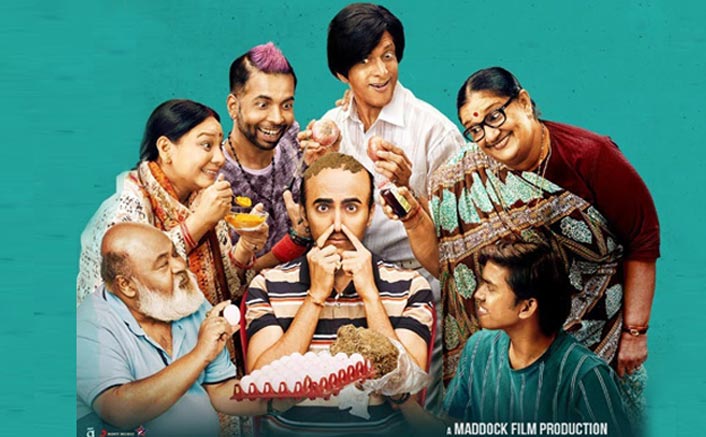 
Bollywood’s Mr Disruptor is at it again, rewriting the rules of what the Hindi mainstream hero can dare to do on screen.

Only a couple of months ago, Ayushmann Khurrana was “Dream Girl”, the phone ‘sexpert’ who aces in impersonating a woman’s voice, and makes a living fulfilling fantasies of lonely men. This week, he returns as “Bala”, a 25-year old whose rapidly receding hairline sets off confident issues, because he is constantly fending against rejection in a world that openly discriminates against physical flaws.

Before that brief synopsis gives you a sense of deja vu because you’ve seen “Ujda Chaman” only last week, “Bala” is a far more accomplished effort. Also, though there is thematic likeness, comparisons would seem unnecessary between the two films because they narrate slightly different tales, owing to the different backdrops the stories are set in.

Importantly, “Bala” has the Ayushmann advantage, evidently the best thing a filmmaker can hope to work with – creatively as well as commercially – right now in Bollywood.

Watching Ayushmann go as protagonist Bal Mukund Shukla – Bala to friends and family – you understand why casting the actor has been an advantage lately. He has managed to elevate his brand value to that of a star, because the audience flocks to see him. Yet, his characters are rooted in reality, letting writers and directors capitalise on his slant at experimentation.

Niren Bhatt’s script, however, is not solely about Ayushmann or Bala. There is a fascinating tri-faceted reflection of the human perception about looking good. If, on the one hand, Bala is tormented because he is losing out in personal and professional life owing to loss of hair, his neighbour — the darkskinned Latika (Bhumi Pednekar) — is used to another pertinent aspect of bodyshaming since childhood. She is the darkskinned girl in smalltown Kanpur, who is bright enough to carve her professional space as a lawyer, but not bright enough in complexion to interest the neighbourhood cool dude Bala through their growing-up years.

Cut to present times and, desperate for a solution, Bala finally settles for a wig. Life takes an upward swing as, almost coincidentally around the same time, he meets Pari (Yami Gautam), the third angle in this story. She is a pretty TikTok star, signed up to sell fairness cream by the Ayurvedic cosmetics firm where Bala works.

Bala, Latika and Pari represent three ways to look at physical imperfections in life. You could be Bala, and suffer from complexes, till you get the crutch of a wig to gain confidence. You could be Latika who, despite her dark complexion, battles to face every societal scorn with her chin up.

Or, you could be Pari, whose logic for being obsessed with beauty must rank among the most original ones in Hindi mainstream ever: Beauty, for Pari, is not a badge of vanity. Rather, it is a support system that elevates her otherwise ordinary life – from the mediocre girl in school and the mediocre woman as a gown-up, to someone everyone is crazy about. So, how can she let go of her beautiful existence by being married to a bald man, she haplessly asks Bala.

Gentle psychological probing as these make the characters more believable, in turn ensuring the film is much more than just a laugh riot about wigs coming off at the wrong place and time, or hero and heroine recording hilarious TikTok videos on cheesy romantic tunes of the nineties.

“Bala”, in every sense, is a rare Bollywood film that can be credited as a writer’s triumph first and foremost, for the way it manages to retain contextual depth despite never losing out on humour. Few comedies in commercial Bollywood have tried doing so in recent years — the “Munna Bhai” films come to mind as random recall.

Amar Kaushik, the man who shot to fame directing the horror comedy “Stree” last year, tackles a very different genre of humour here. The issue-based, feel-good comedy, set in a smalltown, has become staple fare in Bollywood lately, and each new release in the genre faces the challenge of reinvention. Kaushik’s brilliance lies in his natural storytelling, which makes “Bala” instantly likeable. The film’s dialogues are an asset, in this context.

A big part of the paisa vasool deal about the film is watching Ayushmann Khurrana act, not just as the protagonist, but also as Shah Rukh Khan, Amitabh Bachchan, Dev Anand and Sunny Deol – Bala after all is a wannabe stand-up comedian on the side, with a fetish for mimicking top Bollywood stars.

Mimicry in fact is a big attraction all through. In a hilarious situation, Ayushmann as Bala is venting frustration with his two close friends, Bachchan bhaiya (Javed Jaffrey) and Ramu the neighbourhood hairdresser (Abhishek Banerjee). Slightly sozzled, they speak in Amitabh Bachchan style, executing the words with Amitabh Bachchan swagger. The scene is a tribute to an evergreen legend by three very talented artistes of our times, a standout moment in every sense.

Bhumi and Yami are perfectly cast in roles that accord importance to the heroines, though Bhumi’s blackened make-up to make her appear darkskinned looks unconvincing.

Overall, “Bala” is a winner all the way for Ayushmann. This is the actor’s 13th release in Bollywood, ever since he made his debut with 2012’s “Vicky Donor”. That makes the film a very lucky 13 for the actor. Coming after six consecutive hits over the recent past, this film is guaranteed to complete a Super Seven run for Ayushmann at the box-office.

Over 2 million pounds of contaminated chicken products recalled across 8 states, including Georgia