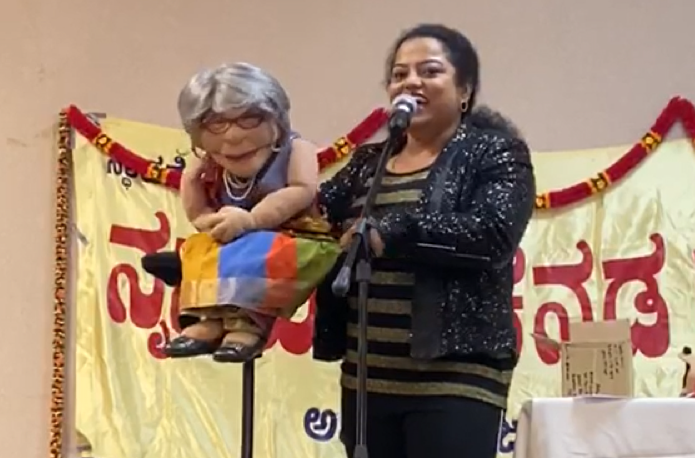 The day-long celebrations were brimming with traditional fervor, be it food, games or entertainment. Sweet mixture of ellu & bella (sesame & jaggery) along with many fun activities like rangoli competitions, antakshari, karaoke, super minute, chess, carrom, chowka-bara and art competitions for all age groups along with cultural programs kept the crowd entertained throughout the day. Many of the BOD and EC members along with volunteers personally hosted the traditional games and distributed prize to all winners. Deepa Anand anchored the event.

“NKK event was very successful in depicting our Karnataka culture. Our games and songs were focused on preserving and bringing back traditional games and music,” said Dr. Anu Bhat, BOD, NKK.

Beginning with a recitation of prayer, an array of cultural programs enthralled the audience including Karaoke performances by many singers from the community. “It was wonderful to see many kids sing in front of larger audience,” said Diwakar Dyamanna, EC member, NKK.

Polyglot author Kiran Bhat presented his latest novel WE, of the forsaken world.

Saving the best for last in the primetime segment, India’s first female ventriloquist Indushree Ravindra captivated the audience with her clean acts of comedy including her puppet friends Dinku, Ajji, and Thata. Indushree took ventriloquism to new heights of imagination and ingenuity as she invited audience to become real live puppets on stage, offering irresistible fun and laughter as they engage in conversations totally unknown to them.

Makara Sankranti, also known as Magh Bihu, Lohri, Thai Pongal in various parts of the country, is dedicated to the Sun God. It is one of the few ancient Indian festivals that has been observed according to solar cycles, observed on a day which usually falls on 14 January of the Gregorian calendar, but sometimes on 15 January, rather than lunar.

From its humble beginnings in 1973, NKK has come a long way. NKK has donated to various charitable causes, runs Kannada classes at three locations through their Kannada Kali programs, and organizes events throughout the year.  NKK has adopted Douglas Highway – Adopt a Mile program, which this year, Drs Anu and Subrahmanya Bhat personally tended to, along with Manu Rao and Joshi.

Indian-Americans come out in support of CAA in Atlanta