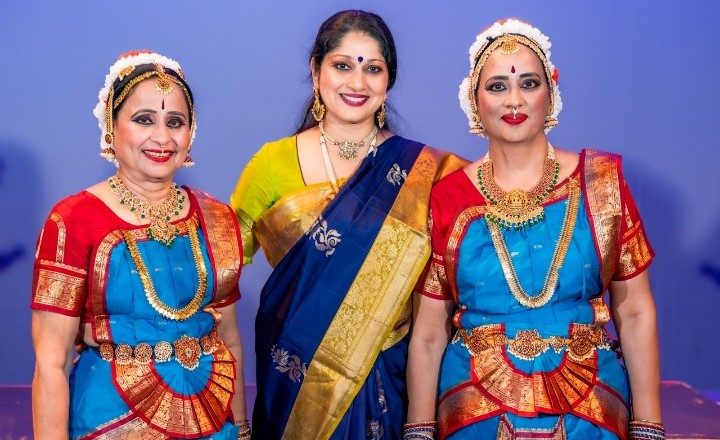 Durham, NC, September 30, 2022: The Triangle Area is again buzzing with many cultural events. Here, the folks have started to get back to normal life after a two-year pandemic interlude.

Earlier this month, they witnessed another unique feature in the form of Bharatanatyam Arangetram by two grandmothers in their sixties engaging the audience for over two hours with their scintillating dance performance. Two weeks ago, the folks had enjoyed for the first time the Bharatanatyam Arangetram by Viral Lakhani, a mother of two kids and in her early forties, who gave a rave dance performance.

Hard work, dedication, perseverance have paid off in their dance journey.  With this accomplishment, they have become a great source of inspiration not only to young students, but also to the many mothers who feel inclined to pursue their own dreams, no matter how old they are.

Ratna Kumari and Vandana have been learning the Indian classical dance for the last 12 years from Guru Sridevi. After seeing many young students perform their own Arangetrams, their desires rekindled to have formal classical dance lessons, and wanted very much to do their Arangetram. With Guru Sridevi, they were able to pursue their childhood dreams, and come to this stage in their dance journey to present their dance recital together.

The peculiar aspect of these dance partners is how they have overcome their personal disabilities. Ratna Kumari is a breast-cancer survivor, and Vandana had multiple back surgeries and a recent neck surgery.

Guru Sridevi says age is no limitation, if one has a keen intent in learning and performing the ancient Indian classical dance skills. And these dance partners have persevered all these years to prove their Guru was right. Indeed they did with their marvelous performance at their Arangetram. And with the choice of the dance items, particularly Varnam,  Annamacharya Medley and Bhajan, they have mesmerized the folks who felt very touched and souls elevated with their story-telling style of the all familiar devotional themes.

The margam of the dance recital was aptly selected by their Guru Sridevi; and the Mangalam with Hanuman Chalisa theme was just beautiful.  The dancers with their grandchildren holding Aarthi tealights have brought the whole audience participating. And a standing ovation to their great accomplishment!

The dancers paid homage to their beloved Amma Guru Karnataka Kalashree Ranganayaki Rajan by performing ‘Sree Rama Saraswathi’, a dance item in praise of the trinities Lakshmi, Parvathi and Saraswathi.  This was sung by Late Ranganayaki Rajan whose voice energizes their bodies to dance and feel her love. ‘Sree Rama Saraswathi’ was  Amrita’s first public dance performance more than 20 years ago. Amrita is the daughter of Vandana, and was one of the first batch of Laasya School graduates who had Arangetram under the guidance of Guru Sridevi Jagannath.

And last Saturday Amrita joined Ratna Kumari and Vandana in performing ‘Sree Rama Saraswathi’, and the presentation was so awesome, that the audience jumping from their seats felt they had the real darshan of the trinities.

Smt Hasita Oza, a great exponent of Kathak dance, one of the eight Indian classical dances, was the guest of honor at this dance recital. She complimented Guru Sridevi for teaching Indian classical dance in the Triangle Area for over 30 years and still going strong, bringing  great name to Laasya School of Dance & Music.

The recital concluded with the presentation of certificates of completion by Guru Sridevi, compliments from Nrithya Sakhis to the dancers, and thank you speeches from Vandana and Ratna Kumari.

The success of the evening is due to the excellent support from Jeff Alguire, Theatre Manager, East Chapel Hill High School, the venue for the Arangetram.

The studio recording of the dance songs is very noteworthy by the orchestra group in Bengaluru by Raghuram Rajagopalan (vocalist), S.V. Balakrishna (mridangam), Vivek Krishna (flute), Gopal V. Rao (veena), Dhanush N (rhythm pad). And Nattuvangam by Guru Sridevi Jagannath live was excellent. The whole orchestra and the dance partners have transported the audience to a world of enchantment!

Ratna Kumari Vanguri graduated from Osmania University, India.  She lived in Cary NC for over 36 years with her husband Prasad and raised their son Pradeep and daughter Deepti. She worked at Rex Hospital  for over 25 years. She and Prasad are now happily retired, and reside in central Florida closer to their grandchildren Maya and Nina. From Childhood she had the passion to learn Bharatanatyam; and with encouragement of Guru Sridevi and her family, she is able to fulfill her dream, hence this milestone in her learning of Indian classical dance for the last 12 years. Kumari has participated and performed in many events which include Nritya Sakhi Presentations by Laasya School of Dance & Music, Sri Venkateswara  Temple of North Carolina, Cary Diwali, Hindu Society of North Carolina, IndiaFest (NavYug), International Festival of Raleigh.

Kumari volunteered for many years at the Hindu Society of North Carolina, Sri Venkateswara Temple of North Carolina, Shirdi Sai Mandir, Cary Arts Center, PRAMUKH, TIPS and TAHTS.  She has inspired many youngsters as a role model with her many contributions to the community.

She has been practicing Internal Medicine for the last 40 years, but her passion shines mostly in volunteering her services and engaging in the community. She has organized several temple-associated Annual Health Fairs, from Sri Venkateswara Temple of North Carolina to a partnership with Triangle Area Hindu Temples (TAHTS) and Triangle Indian American Physicians Society (TIPS). In 2017, she served as the President of NCIAP People’s Medical Care, and continues to serve as Board member and volunteer physician at NCIAP. She is a member of the executive committee of Triangle Indian-American Physicians Society (TIPS) and served as its President from 2018-2021.

As a child, Vandana had shown interest in Indian classical dance and performed in schools and college. After watching her daughter Amrita accomplish her Arangetram in 2000, her desire rekindled to perform classical dance. She began to pursue formal training for 12 years in Bharatanatyam dance from Guru Sridevi Jagannath, Artistic Director, Laasya School of Dance & Music.

Vandana is happily married with a son and a daughter and three grandchildren. It has been her dream for many years to perform her Arangetram.

Guru Sridevi Jagannath is the Director of Laasya School of Dance and Music. A proficient Bharatanatyam dancer, an art which is one of the oldest and magnificent Indian Classical dance forms, she trained under Gurus like Padmini Ravi and K.J. Sarasa. Sridevi has been a performer for over 3 decades. During the years, she had the privilege of improving her skills by taking the able guidance of distinguished dance teachers like Late Guru Smt. Bhanumathi, Guru Smt. Lalitha Srinivasan (Mysore Style). She is currently training under Natyacharya Smt. Shobana Balachandra and Padmini Ravi.  Laasya reached the quarter century milestone in 2020.  She has been a Durham resident for the past 27 years.

Under the banner “Laasya School of Dance and Music’, Sridevi has been grooming innumerable students in this rich art form. Many of her students have completed their graduation under her able guidance and are teachers in the nearby areas.   Laasya School of Dance and Music was established in Durham, NC back in 1995.  Since then, the school has developed a reputation as one of the premier institutions teaching Bharatanatyam in this area. Laasya school has initiated a non-profit organization NATYA, run by senior students of Laasya to promote solo classical dances in the Triangle area.