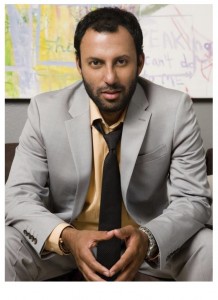 New Delhi, Jan 3 (IANS) Rizwan Manji, an Indian origin actor who resides in the US and appeared with Hollywood star Leonardo DiCaprio in “The Wolf of Wall Street”, says he now wants to be part of movies made by Bollywood superstar Aamir Khan.

Best known for US TV show “Outsourced”, Manji thinks the “Dhoom:3” actor is one of the few people who can bring different emotions together on the big screen at the same time.

“He has a specific way to make you laugh and cry at the same time. As an actor and producer, he has a way of bringing those emotions together. So, if Aamir Khan Productions is interested, I will fly to India tomorrow,” Manji, who enjoyed Aamir’s “3 Idiots” and “Taare Zameen Par”, told IANS in a telephonic interview from New York.

Though Aamir’s movies top his list of Bollywood films, he is smitten by the industry as a whole.

“I am a big fan of Bollywood. I grew up watching Hindi movies. I know of the industry just because I watched the films. I am brushing up my Hindi too,” he said.

If not for movie assignments, the Canada-born actor wouldn’t mind visiting India again as he fell in love with the country a decade ago.

“Me and my wife went backpacking across India for six months in 2003. Coincidentally, that time my film ‘American Desi’ was being played (in Indian theatres). We visited places like Mumbai, Delhi, Agra, Hyderabad and Jaipur. I loved it so much,” he said.

“I also met (Bollywood actor) Govinda that time. It was exciting,” said Manji, whose grandparents hail from Gujarat.

The alumnus of New York’s American Musical and Dramatic Academy had no plans of shifting base from Canada to the US. But thanks to assignments, he decided to pack his bags and reside in Los Angeles.

“I did theatre in New York. I also did MTV show ‘Damage Control’. In 2006, I moved to LA And while pursuing acting, I also worked at Merrill Lynch,” said the actor, who had also applied to law schools.

With distinctive Indian looks, the actor believes that his appearance has pros and cons.

“It has given me lot of opportunities. In my class, there were a number of Caucasians who had to struggle a lot because the market is saturated. On the other hand, there aren’t too many people of my ethnicity; so I got lot of offers,” he said.

“Having said that, there hasn’t been much lead roles. But things are moving in a positive direction. I just wish it happens faster,” added Manji, who had stepped into the shoes of cab drivers and doctors.

After playing small parts in Hollywood movies like “The Guru” and “Transformers”, he has a crucial role in “The Wolf of Wall Street”.

He plays the role of Khalil, a stockbroker in the firm of Jordan Belfort, portrayed by DiCaprio. The Martin Scorsese directorial, distributed by MVP Entertainment and PVR Pictures, will release Friday in India.