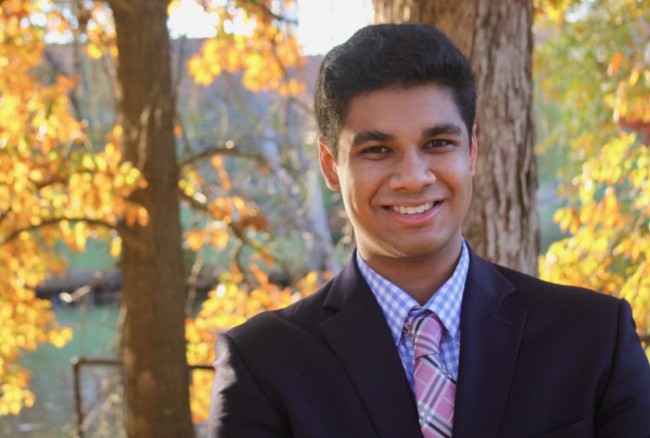 Atlanta,GA, July 9, 2018: Sohan Kancherla, a graduating senior from St Louis,Missouri, was selected as one of 150 Coca-Cola Scholars for 2018. Nationwide, approximately 150,000 students applied for this prestigious honor.

Sohan is the grandson of long timeAtlantaresidents Late Dr. Aruna Prasad and Parvathy Kancherla and the son of Dr. Madhu Kiran and Dr. Madhuri Kancherla.

Kancherla will receive a $20,000 scholarship toward his college education.

Being named a prestigious Coca-Cola Scholar is not Kancherla’s only recognition, according to West Newsmagazine. He was also a recipient of the 2018 Princeton Prize in Race Relations, which recognizes high school students who have had a significant positive effect on race relations in their schools or communities through their volunteer efforts.

Kancherla also was selected as a 2018 AXA Achievement Scholar, which recognizes students who demonstrate ambition and self-drive as evidenced by outstanding achievement in school, community or work-related activities. He will receive a $2,500 scholarship, and his high school St Louis Priory will receive a $1,000 grant from the AXA Foundation.

Kancherla was also recognized as one of 40 nationwide semi-finalists in the Yale Bassett Award for Community Engagement, which recognizes high school juniors who demonstrate a record of creative leadership and public service, academic distinction, interdisciplinary problem solving, and experience addressing societal issues including race and racism.

Kancherla also received the Martin Luther King Jr. Model of Justice Award, given by the Archdiocese of St. Louis to high school students who have demonstrated an outstanding commitment to social justice and serving the broader community.

The Rev. Gregory Mohrmann, Priory’s headmaster, said, “Sohan has been a remarkable example to us all. His leadership, humility and drive has led him to great accomplishments, both in and outside of our school.”

The senior was accepted into Harvard andYaleUniversity. He chose to go to Harvard this fall.