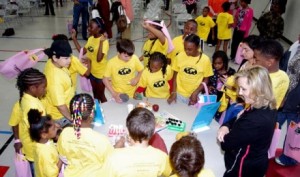 Chicago, IL:  “With obesity proving to be a major epidemic affecting nearly one third of the nation’s population, we have a responsibility to save future generations by decreasing childhood obesity,” Dr. Jayesh Shah, president of the American Association of Physicians of Indian Origin (AAPI), said. Dr. Shah, who assumed charge of AAPI during the 31st annual convention in Chicago last week, was referring to the Childhood Obesity Awareness program AAPI has launched. “We at AAPI are proud to undertake this national educational tour around the United States, impacting thousands of children and their families,” he added.

AAPI has undertaken the challenge to bring about awareness of Childhood Obesity through a program called Adopt a School – Childhood Obesity Awareness Campaign by doing school walkathons and educating the students, teachers and parents  on how to fight this national and global epidemic. This is the first time that national AAPI is working directly with the community and schools for Health Promotion and Disease Prevention, with a goal to adopt at least 100 schools in 2013-2014 in as many States in USA as possible.

Pointing to a recent program towards this objective in his home state, Texas, Dr. Shah, the youngest ever president of AAPI, the largest ethnic organization in the United States representing over 100,00 physicians of Indian origin and Fellows, Dr. Shah said, “In Dallas we had our first school program on May 16th, this year  at the Harrell Budd Elementary School to address the parents and children.” Having four Physicians and an AAPI advisor in addition to the Co-Chair, the event evoked lots of interest from the school teachers and parents. “They were very appreciative of us taking interest in kids’ well being and guiding them to be healthier. We gave away pedometers, handouts in English and Spanish and 5-2-1-0 bookmark that we created. We have made a short video of the event and it will be available at www.tipsnec.org to everyone to view,” Drs. Anupkumar Shetty, Aradhana Asava and Srini Potluri, organizers of the event explained. As a follow up, the school has plans to organize a bigger meeting with parents and teachers in September 2013. Encouraged by the enthusiastic response from the school, they said, “We realized the real need of such programs all the more after doing one and we look forward to cover large number of schools in the next 12-18 months.”

Dr. Uma Koduri, AAPI’s Childhood Obesity Awareness Campaign (COAC) Committee Chair, who has been in the forefront of the obesity awareness campaign in the state of Oklahoma for years now, explains: “Today, almost one in every three children is obese or overweight before reaching 5th birthday.” Consequences of childhood obesity include: high blood pressure, high cholesterol, and Type 2 diabetes, which can shorten the lifespan of our children. American society has become characterized by environments that promote increased consumption of less healthy food and physical inactivity leading to this childhood obesity epidemic.

One of the first such educational school walkathon took place in Tulsa, Oklahoma on April 6th, 2013. It was supported by the local Health Department, the Mayor’s office and the Governor’s office. We distributed free T-shirts, pedometers, educational materials, healthy snacks, plants & seeds to start a kitchen garden and promoted “Let’s Move”, ChooseMyPlate and PALA (Presidential Active Lifestyle Award) programs. We are also promoting 5-2-1-0 concept. The sunshine yellow T-shirts are to promote “Wear Yellow” on AAPI childhood obesity awareness day which will be observed on December 12 every year.

The need to organize the national level campaign is a way towards realizing one of AAPI’s main goals, Dr. Shah said.  “Our primary goal is to educate the public on diseases and their impact on health, AAPI has physicians in almost every city and town of USA. With this extensive network we should be able to spread message on childhood obesity by following the template plan. We are also exploring the use of social media and phone ‘apps’ as healthy lifestyle tools.”

In partnership with local governments, non-governmental agencies and schools around the nation, AAPI plans to embark on this campaign that will identify high prevalence – high risk schools and choosing 100 schools for the year 2013-14, with the objective of promoting awareness of Childhood Obesity and offering educational resources to promote healthy lifestyle. In addition, it will also work towards advocating policy changes to help build a healthier community.  Our advocacy agenda is very simple, we believe families should get discounts in insurance premium if they exercise and join fitness clubs and all schools should have compulsory physical education class.

The COAC Committee of AAPI consists of 18 physicians whose goal is to spread awareness of childhood obesity in USA and educate the parents and teachers about simple, effective, practical and implementable ideas to tackle obesity in their children.  “We want to empower our children/parents/teachers by educating them to help themselves to lead healthy lives,” Dr. Koduri says. “Through its ADOPT-A-SCHOOL program AAPI plans to organize a 2-3 hour Childhood Obesity Walkathon event in every adopted school, inviting hundreds to thousands of school students, their parents and teachers. We will be inviting prominent health/school/government officials for motivational speeches, while AAPI physicians deliver talks about childhood obesity and how to tackle it. We will provide education material that promotes healthy meal and lifestyle choices; and distribute free T-shirts and pedometers.”

In addition, AAPI wants to help promote First Lady Michelle Obama’s Let’s Move program, emphasizing two specific items: “Choose My Plate” which replaces the more complicated Food Pyramid and is easier to use. It illustrates the 5 food groups- fruits, vegetables, grains, protein foods and dairy. And, PALA- Presidential Active Lifestyle Award, that students can sign up for. PALA consists of a six-week log-sheet that students can use to log in what they eat and how much activity they do daily in number of minutes or in pedometer steps. When a student does a good job on it, that student receives the President’s Award. It is very easy to use and will help motivate school students to improve their eating habits and their amount of exercise. Through distribution of T-shirts, pedometers and educational material during these walkathons and later on, AAPI plans to reach out to a large segment of the population in each town.

In the years to come, AAPI will be known for its Childhood Obesity Walks just like the AHA is known for its Heart Walks. We believe that tackling the Childhood Obesity problem is like “an ounce of prevention is worth a pound of cure.”  Medical costs for the obese are higher than those for the normal weight individuals. Dr. Shah believes that AAPI’s branding slogan for walkathon, “Be fit- Be cool” will go a long way in educating the public and in contributing to the prevention of childhood obesity now, and thus translating into lower health care costs in the future.

AAPI is a forum to facilitate and enable Indian American Physicians to excel in patient care, teaching and research and to pursue their aspirations in professional and community affairs. For more details on the Nine City Tour and the Childhood Obesity Awareness Campaign,   please visit: www.aapiregionalconference.org.