Mumbai, Aug 9 (IANS) The posters of forthcoming film “PK” showing Bollywood superstar Aamir Khan virtually nude, finally got some clothes here Saturday.
Vile Parle Congress legislator Krishna Hegde ‘dressed’ up the actor’s poster and a cutout before a large number of people who cheered and clapped their approval.
Terming the actor’s posters as “distasteful and against Indian culture,” Hegde formally ‘clothed’ Aamir in the poster in a bright green pair of shorts and a grey tee-shirt.
“Aamir Khan is a good actor and hosts Satyameva Jayate. These posters are distasteful and against Indian culture. They create a wrong impression in the minds of families and youngsters who consider him an icon,” Hegde said at the symbolic event.
He urged Aamir to immediately withdraw this objectionable ‘nude presentation’ on the movie “PK” posters, which “has crossed limits.” 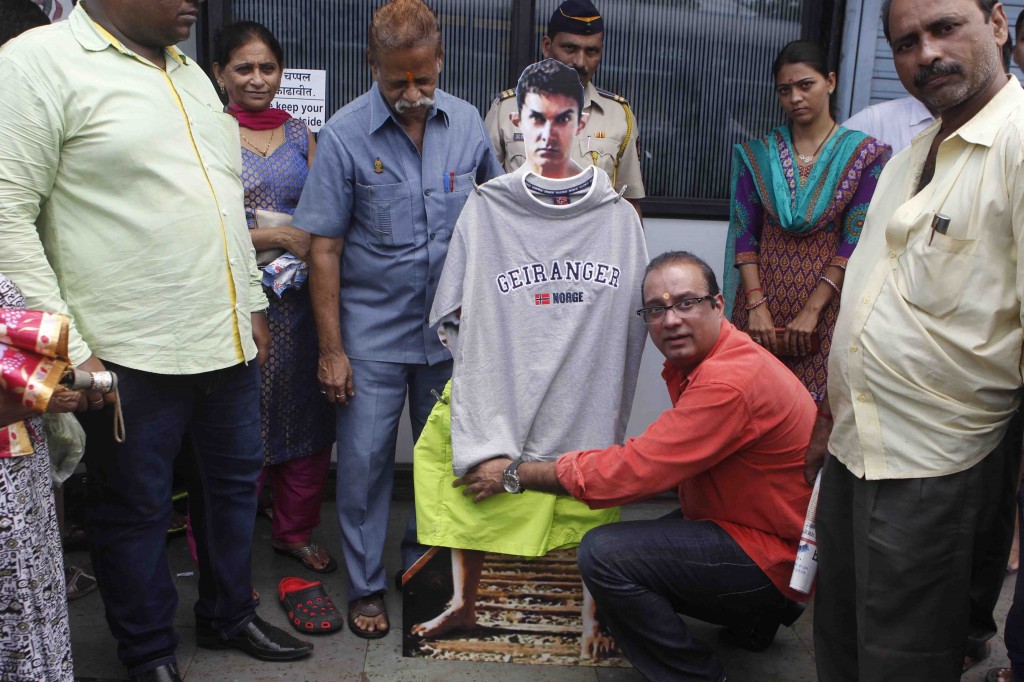 However, he clarified that the intention was not to indulge in moral policing but to send a message that such posters are not required for publicity for an acclaimed actor like Aamir.
Aamir (49) had termed the controversial poster a “key art”, depicting the storyline of the movie made by Rajkumar Hirani.
Defending it, Aamir had said, “When you (audience) will watch the film then only you will be able to understand the idea behind (the poster). But I would just like to say that the kind of filmmaker, the kind of writer Rajkumar is, he always tries to present the things, his thinking, in a unique way and that’s why I am his huge fan.”
Besides Aamir, the movie – slated for a December release – features Sanjay Dutt, Anushka Sharma and Sushant Singh Rajput.
previous post