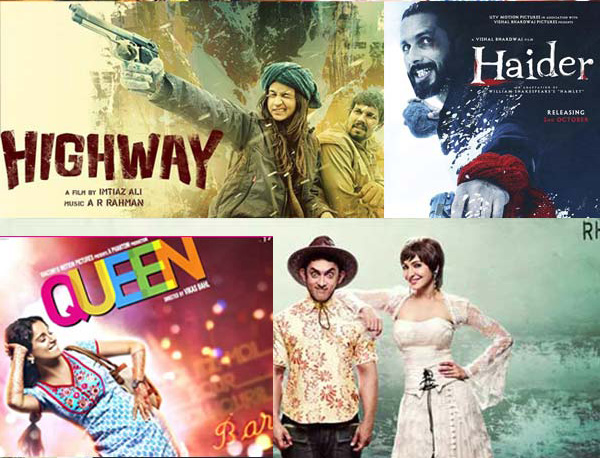 New Delhi, Dec 30 (IANS) Although big-budget formula films kept hitting the box office on regular intervals, 2014 straddled much more on sleeper hits such as “Queen”, “Highway”, “Mary Kom” and “Haider”. As different as chalk and cheese in terms of genre, storyline and presentation, the success saga of these films established that viewers’ taste has changed and they would accept any story – if told well.

“Highway”: Shot in places like Delhi, Punjab and Himachal Pradesh, the road movie revolves around two people who are brought together by fate. What really clicked were the story line, its execution and performances by the lead actors – Alia Bhatt and Randeep Hooda. While Alia’s performance was fresh, Randeep took his acting skills to another level in the film. Directed by Imtiaz Ali, the film not only appealed to the critics but also entertained the viewers. Made on a budget of approximately Rs.25 crore, the movie grossed Rs.30 crore.

“Queen”: Kangana Ranaut played an inspirational girl next door in this highly acclaimed film. Directed by Vikas Bahl, the comedy-drama presents the life of bride-to-be Rani who decides to go on her honeymoon alone. Apart from the well-written script and a standout performance by Kangana, the film’s other actors like Rajkummar Rao and Lisa Haydon also won many hearts. The Rs.25 crore film collected a whopping Rs.55 crore in India.

“Citylights”: Made at a budget of less than Rs.6 crore, it collected Rs.10 crore and was also appreciated for its unique story line and brilliant performance by lead actor Rajkummar Rao. Directed by Hansal Mehta, the film is about a couple with rustic innocence. How they try to survive in a big city forms rest of the story.

“Mardaani”: Set against the backdrop of child trafficking, the Rani Mukerji-starrer raised the issue with great perfection under Pradeep Sarkar’s direction. Made on a budget of around Rs. 30 crore, the film was praised for spreading awareness and also entertaining the masses. It minted Rs.40 crore at the box office.

“Mary Kom”: Priyanka Chopra’s “Mary Kom” was about the heart-touching and motivational past of the Manipuri boxing champion with dignity and passion. The woman-oriented film became a big hit at the box office collecting Rs.54 crore. Directed by debutant Omung Kumar, the film was one of the most inspiring biopics to have ever reached the silver screen and was made at a budget of approximately Rs.50 crore.

“Haider”: A modern-day adaptation of “Hamlet”, “Haider” was the comeback film of Shahid Kapoor to the A-listers of Bollywood. With Kashmir as its backdrop, the Vishal Bharadwaj directorial is a wondrous work of art. Also, thanks to the brilliant cast, which also included Tabu, Shraddha Kapoor, Kay Kay Menon and Irrfan Khan, the Rs.40-crore film earned Rs.50 crore.

“Bang Bang!”: Despite being tagged as “mindless”, “loud”, “dumb”, “pointless” and “exhausting” by the critics, the Hrithik Roshan-Katrina Kaif-starrer was one of the biggest blockbusters of the year, collecting Rs.145 crore. Made at a budget of more than Rs.100 crore, the Siddharth Anand directorial was prepared with ingredients like romance, jaw-dropping action sequences, peppy music and good looking actors.

“Happy New Year”: Bollywood’s “Badshah” Shah Rukh Khan treated his fans to “Happy New Year” during Diwali. And like his other Diwali releases such as “Dilwale Dulhania Le Jayenge” and “Dil To Pagal Hai”, the Farah Khan directorial was a blockbuster. The movie, which also featured Deepika Padukone, Abhishek Bachchan, Boman Irani, Vivaan Shah and Sonu Sood, was made at a big budget of Rs.125 crore and minted Rs.188 crore at the domestic box office.

“PK”: Aamir Khan’s much anticipated comedy-drama “PK” stirred thought and discussion and struck gold at the box office too. Directed by Rajkumar Hirani, it earned Rs.214.14 crore in its second week and is still counting. The film, which used an alien, played by Aamir, to highlight the ills of society was made at a budget of Rs.110 crore.